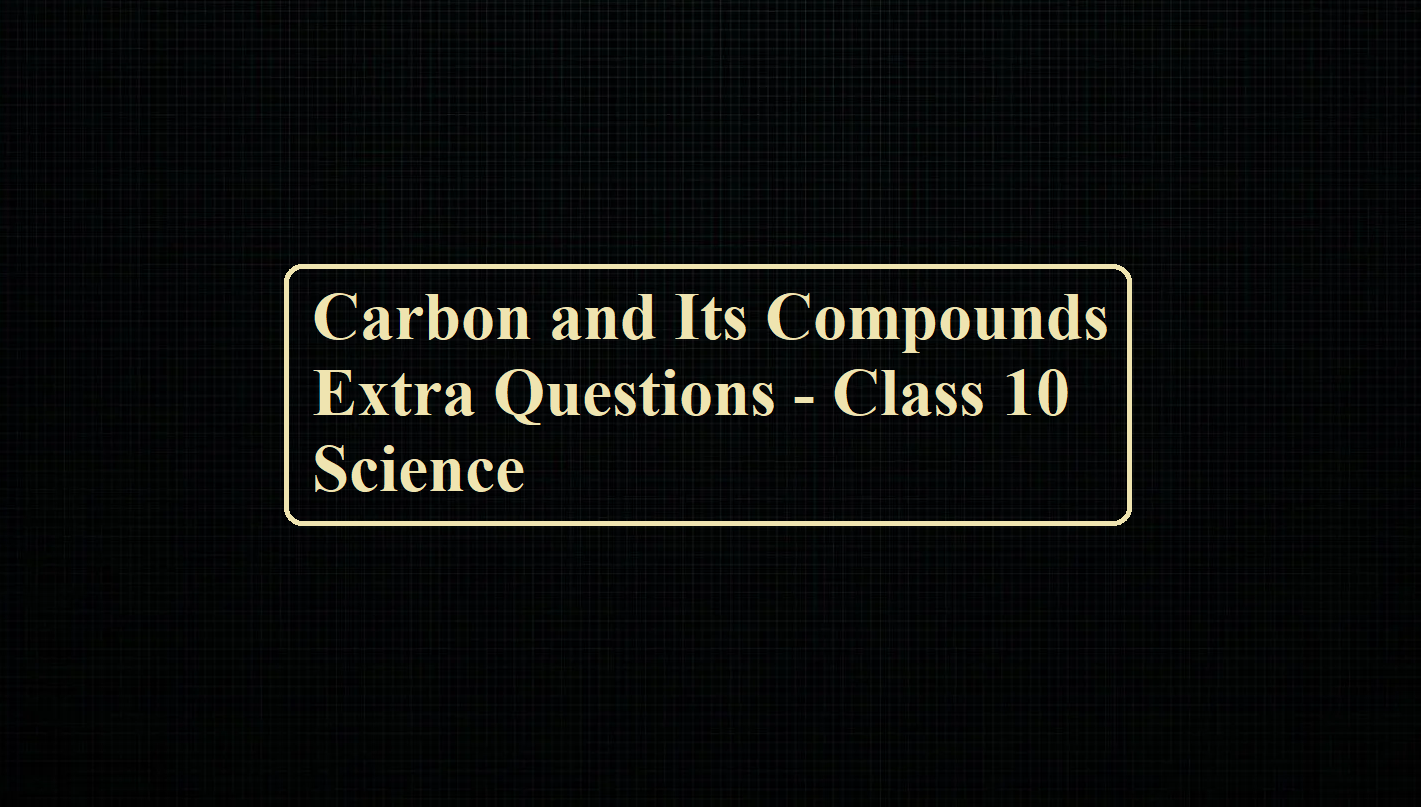 Que 3. What is a hydrocarbon?
Ans 3. It is a compound of hydrogen and carbon.

Que 4. What are The physical properties of Carbon compounds or covalent compounds?
Ans 4. The covalent compound exhibits the following properties:
(i) These have low melting and boiling point.
(ii) These do not conduct electricity either in the solid-state or in the molten state or in the solution form. They are non-electrolyte.
(iii) These are readily soluble in non-polar solvents like benzene, carbon tetrachloride, etc., but do not dissolve in polar solvents like water.
(iv) The covalent bond is directional in nature.

Que 7. What is the role of concentrated H2SO4 in the esterification reaction?
Ans 7. In an esterification reaction, a carboxylic acid reacts with alcohol to form ester and water in the presence of concentrated sulphuric acid. This reaction is reversible and this reverse reaction is called ester hydrolysis. Concentrated sulphuric acid being a strong dehydrating agent removes water from the reaction mixture. As a result, the reaction proceeds only in the forward direction to form an ester.
RCOOH + ROH —-Conc. H2SO4 → RCOOR + H2O Que 11. What is catenation?
Ans 11. Carbon has the unique ability to form bonds with the other atoms of carbon which gives rise to large molecules. This property of self linking is called catenation.

Que 13. Why is candle flame generally yellow?
Ans 13. A candle flame is generally yellow due to the presence of unburnt carbon particles. When light falls on these particles, they scatter yellow color. This shows that the combustion of hydrocarbons present in wax or candle is not complete.

Que 18. What are the two properties of carbon which lead to the huge number of carbon compounds we see around us?
Ans 18. The two features of carbon that give rise to a large number of compounds are as follows:
(i) Catenation − It is the ability to form bonds with other atoms of carbon.
(ii) Tetravalency − With the valency of four, carbon is capable of bonding with four other atoms.

Que 21. The formula of a hydrocarbon is CnH2n. Name the family to which it belongs and also predict its nature.
Ans 21. The hydrocarbon belongs to the alkene family. It is unsaturated in nature.
Examples:
(i) Formation of Oxygen atom has six electrons in its outermost shell, two short of forming a complete octet. Thus, each oxygen atom in O₂ shares 2 electrons with the other oxygen atom to attain a stable configuration.
(ii) Formation of ethylene molecule (C₂H₄): In ethylene two carbon atom shares two pair of electrons between them and the rest two electrons on each carbon atom share one electron each with two hydrogen atoms. Thus, ethylene molecules have one double bond(C=C) and four single bonds (C-H).

Que 23. What is a homologous series? State any two characteristics of homologous series?
Ans 23. A series of similarly constituted compounds in which the members present have the same functional group, same chemical properties, and any two successive members is a particular series differ in their molecular formula by CH2 group.
(i) Same functional group
(ii) Same chemical properties.

Que 24. Given a chemical test to distinguish between
(a) Ethene and ethane
(b). Ethanol and ethanoic acid
(c). Soaps and Detergents
Ans 24. (a) Ethene decolorizes the yellow color of bromine while ethane does not.
(b) Ethanoic acid gives a brisk effervescence with sodium hydrogen carbonate while ethanol does not.
(c) Soaps form curdy white precipitate or scum with hard water while detergents do not form any precipitate.

Que 25. What change has been made in the composition of detergents to make them biodegradable?
Ans 25. Detergents made from long-chain hydrocarbons having the minimum branching in their molecules are degraded more easily.

Que 26. Would you be able to check if water is hard by using a detergent?
Ans 26. Detergents are ammonium or sulphonate salts of long-chain carboxylic acids. Unlike soap, they do not react with calcium and magnesium ions present in hard water to form scum. They give a good amount of lather irrespective of whether the water is hard or soft. This means that detergents can be used in both soft and hard water. Therefore, it cannot be used to check whether the water is hard or not.

Que 27. Give two properties of ethanol.
Ans 27. (a) Liquid at room temperature
(b) Soluble in H2O in all proportions

Que 30. Write chemical equations to show what happens when
(i) Ethanol is heated with concentrated sulphuric acid at 443 K.
(ii) Ethanol reacts with ethanoic acid in the presence of an acid acting as a catalyst.
(iii) An ester reacts with a base.
Ans 30. (i) When ethanol is heated with concentrated sulphuric acid at 443K, it gets dehydrated to form ethene
CH3CH2OH + H2SO4(Conc.) → CH2=CH2 + H2O
(ii) When ethanol reacts with ethanoic acid on warming in the presence of a few drops of conc. sulphuric acid to form a sweet-smelling ester, ethyl ethanoate
CH3COOH + C2H5OH —-Conc. H2SO4–→ CH3COOC2H5
(iii) When an ester is heated with a base (sodium hydroxide) solution then the ester gets hydrolyzed (breaks down) to form the parent alcohol and sodium salt of the carboxylic acid.
CH3COOC2H5 + NaOH → CH3COONa + C2H5OH