By Dr. Vikas JasrotiaFebruary 16, 2022No Comments 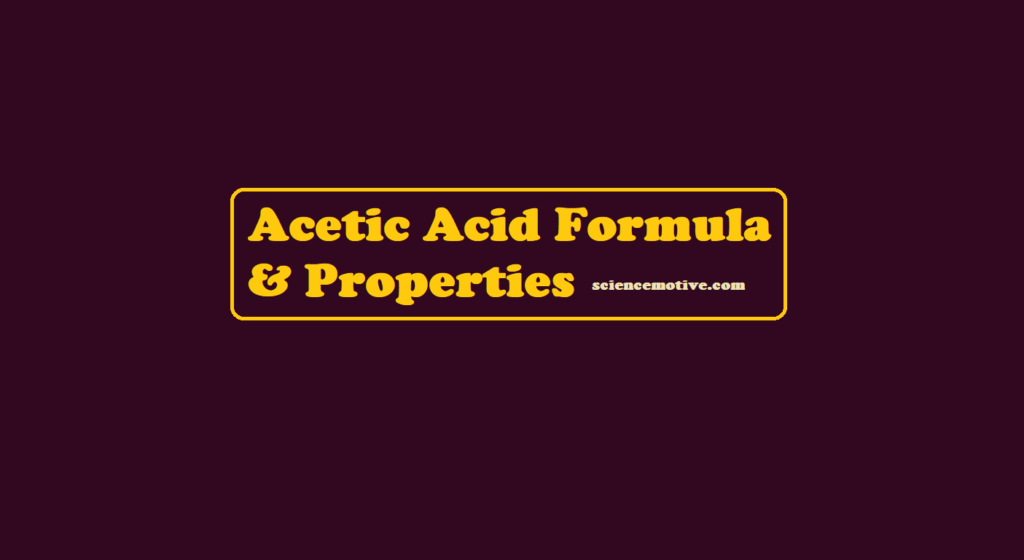 Ethanoic Acid or Acetic Acid (CH3COOH):
a) Ethanoic acid is very popular by its common name i.e., acetic acid. It is generally present in many fruits and their sour taste is because of the acid.
b) A dilute aqueous solution of acid-containing only 5 to 8 per cent acid (rest is water) is called vinegar.
c) It is used for the preservation of sausage, pickles etc. Preparation of Ethanoic Acid: A number of methods are available for the preparation of the acid. We are discussing the preparation from ethanol and methanol.
a) From ethanol: This method involves the slow oxidation of a dilute solution of ethanol (10 – 15 per cent) by oxygen present in the air in the presence of an enzyme acetobacter.

The acid obtained is in the form of a dilute solution called vinegar.
b) From methanol: These days ethanoic acid is manufactured by the reaction between methanol and carbon monoxide in the presence of iodine-rhodium (I­2–Rh) catalyst mixture.

Physical Properties of Ethanoic Acid [CH3COOH]
1. At room temperature pure acetic acid is a corrosive and colourless liquid.
2. It has a pungent smell of its own, like that of vinegar and has a sour taste.
3. It freezes below 16.5 0C to form an icy mass, which gives its name glacial acetic acid. 5-8% solution of glacial acetic acid is called vinegar.
4. It boils at 118°C (391 K).
5. Its density is 1.08 g cm–3 at 0°C.
6. It is soluble in water in all proportions.
7. It is a good solvent for iodine, sulphur, phosphorus and a number of organic compounds.

Chemical Properties:
The chemical characteristics of the acid are mainly of the carboxyl group.
a) Acidic nature: The acidic nature of ethanoic acid is supported by a litmus test. On adding a few drops of blue litmus to the aqueous solution of the acid, the solution acquires a red colour.
b) But ethanoic acid is a weaker acid than minerals like H2SO4, HCl and HNO3. In fact, organic acids are weaker acids than inorganic acids since they are ionized to a smaller extent in solution.
c) Reaction with metals: Ethanoic acid evolves hydrogen on reacting with active metals present above hydrogen in the reactivity series. As a result, metal salts are formed. For example.

d) Neutralization reactions: Ethanoic acid reacts with metal hydroxides, carbonates and hydrogen carbonates to form salts. The reactions are called neutralization reactions. For example.
CH3COOH + NaOH →  CH3COONa + H2O
CH3COOH + Na2CO3 → 2 CH3COONa + H2O + CO2 ↑
CH3COOH + NaHCO3 → 2 CH3COONa + H2O + CO2 ↑
In the case of reaction between sodium hydrogen carbonate and ethanoic acid, carbon dioxide gas is evolved, accompanied by brisk effervescence. It also turns lime water milky. This reaction is used as a test for ethanoic acid and other carboxylic acids.
e) Esters are usually volatile liquids having a sweet smell or pleasant smell. They are also said to have a fruity smell. Esters are used in making artificial perfumes (artificial scents). This is because of the fact that most of the esters have a pleasant smell.
f) Reaction with Alkalies: When an ester is heated with sodium hydroxide solution then the ester gets beaks down to form the parent alcohol and sodium salt of the carboxylic acid. For example, when ethyl ethanoate ester is boiled with sodium hydroxide solution, then sodium ethanoate and ethanol are produced:
CH3COOC2H5 + NaOH → CH3COONa + C2H5OH
The alkaline hydrolysis of esters (using alkali like sodium hydroxide) is known as saponification (soap-making). This is because of the fact that this reaction is used for the preparation of soaps. When the esters of higher fatty acids with glycerol (oils and fats) undergo a reaction with sodium hydroxide solution, we get sodium salts of higher fatty acids which are called soaps.
g) Esterification reaction: When carboxylic acid and alcohol react, the product formed is known as an ester. Below is an example of the formation of an ester from the reaction of ethanoic acid with absolute ethanol in the presence of an acid as a catalyst.
CH3COOH     +      CH3CH2OH      →     CH3COOCH2CH3
(Ethanoic acid)          (Ethanol)                         (Esters)

Distinction Between Ethyl Alcohol and Acetic acid:
a) Litmus test: Add a few drops of blue litmus solution in two test tubes containing ethyl alcohol and acetic acid. Its colour will change to red in the acid while it will remain unaffected in alcohol.
b) Sodium Hydrogen Carbonate Test: The distinction can also be made with sodium hydrogen carbonate (NaHCO3). The brisk effervescence of CO2(g) will be noticed in the acid while no effervescence will be noticed in alcohol.
CH3COOH + NaHCO3 → 2 CH3COONa + H2O + CO2 ↑

Glacial Acetic Acid:
Ethanoic acid is also referred to as glacial acetic acid because its melting point is 16 0C. Hence, it often freezes in winter when the climate is cold.