By Dr. Vikas JasrotiaOctober 26, 2020No Comments 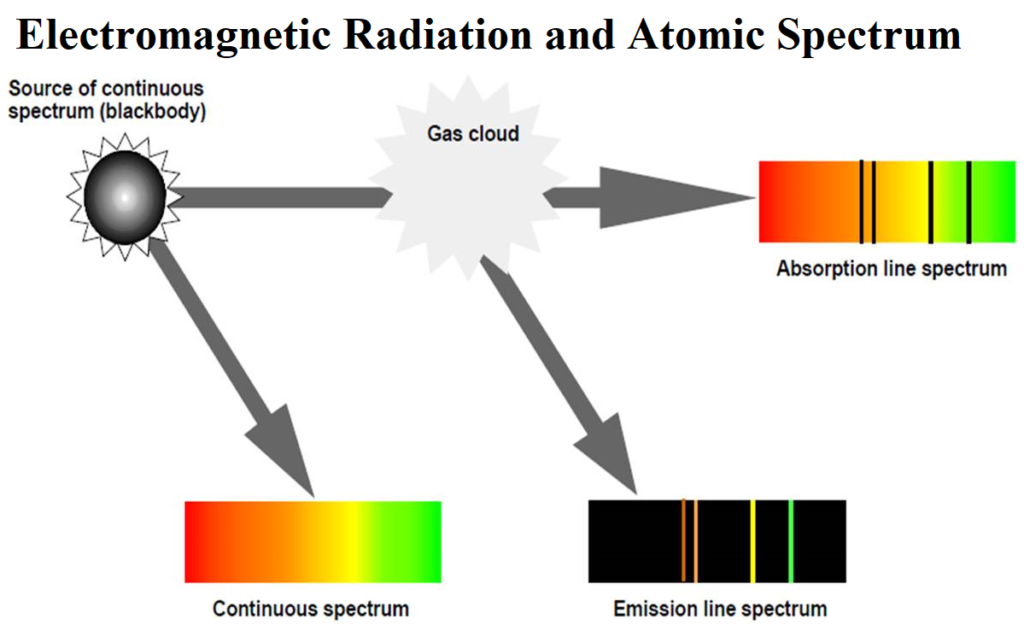 Properties of electromagnetic radiations:
(i) Oscillating electric and magnetic field is produced by oscillating charged particles. These fields are perpendicular to each other and both are perpendicular to the direction of propagation of the wave.
(ii) They do not need a medium to travel. That means they can even travel in a vacuum. 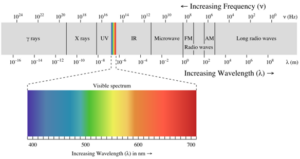 Planck’s Quantum Theory:
(i) The radiant energy is emitted or absorbed not continuously but discontinuously in the form of small discrete packets of energy called ‘quantum’. In the case of light, the quantum of energy is called a ‘photon’.
(ii) The energy of each quantum is directly proportional to the frequency of the radiation, i.e. E α υ or E= hυ where h = Planck’s constant = 6.626 x 10-27 Js.
(iii) Energy is always emitted or absorbed as an integral multiple of this quantum.
E = nhυ              Where n=1,2,3,4,…..
Some of the experimental phenomena like diffraction and interference can be explained by the wave nature of electromagnetic radiation. But some phenomena like black body radiation, photoelectric effect, a variation of heat capacity of solids with temperature, line spectra of atoms etc. could not be explained by the wave nature of electromagnetic radiation. Photoelectric effect: The phenomenon of ejection of electrons from the surface of the metal (for example potassium, rubidium, caesium etc.) when the light of suitable frequency strikes it is called the photoelectric effect. 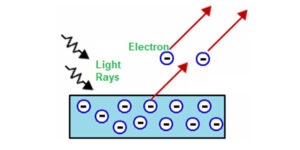 Electromagnetic Radiation and Atomic Spectrum:
Atomic Spectra: When white light is passed through a prism, it splits into a series of coloured bands known as spectrum.
when electromagnetic radiation interacts with matter, atoms and molecules may absorb energy and reach a higher energy unstable state. To attain stability, they emit radiations in the form of a spectrum. Such a spectrum is called Atomic Spectrum.

Spectrum is of Two Types: Continuous and Line spectrum
(i) The spectrum which consists of all the wavelengths is called Continuous Spectrum.
(ii) A spectrum in which only specific wavelengths are present is known as a Line spectrum. It has bright lines with dark spaces between them. Line emission spectra are very useful in the study of the electronic structure of atoms. Each element has a unique line emission spectrum. The characteristic lines in atomic spectra can be used in chemical analysis to identify unknown atoms in the same way as finger-prints are used to identify people. So, line emission spectra are also called finger-print of atoms.

An absorption spectrum is like the photographic negative of an emission spectrum. Here a continuum of radiation (like white light) is passed through a sample which absorbs radiation of certain wavelengths. The missing wavelengths leave dark spaces in the bright continuous spectrum.

Line Spectrum of the Hydrogen atom:
When an electric discharge is passed through gaseous hydrogen, the H2 molecules dissociate and the energetically excited hydrogen atoms produced emit electromagnetic radiation of discrete frequencies. The hydrogen spectrum consists of several series of lines named after their discoverers. The first five series of lines are Lyman, Balmer, Paschen, Brackett and Pfund series. Among these lines, the Balmer series is the only series that we can be visible (since it lies in the visible region of emr). Johannes Rydberg proposed an equation for finding the wavenumber of the different lines in the Hydrogen spectrum.

The Discovery of Subatomic Particles