A colloid is an intermediate state between true solution and suspension. In a true solution, the size of the particles is < 1nm. The particles do not settle down under the influence of gravity or by any method and they cannot be filtered by a filter paper. 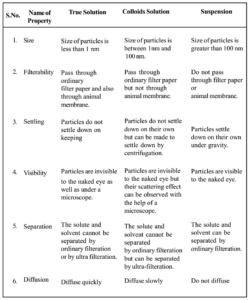 (ii) Based on the nature of the dispersion medium:

Based on the attraction between the dispersed phase and the dispersion medium:

If the force of attraction between the dispersed phase and dispersion medium is weak, it is called a lyophobic sol. e.g. Arsenic sulphide (As2S3) sol, Sulpher sol and metal sols like gold sol, silver sol etc.

Difference Between Lyophilic and Lyophobic Sols:

Based on Nature of Particles:
On this basis, the colloids are classified into three types namely Multimolecular colloids, Macromolecular colloids and Associated colloids.
Multimolecular colloids. They are formed by the aggregation of a large number of atoms or molecules which generally have a diameter less than 1nm, e.g., sols of gold, sulphur etc. Their atoms or molecules are held together by weak van der Waals forces and their molecular masses are not high.
Macromolecular colloids. They are molecules of large size, e.g., polymers like rubber, nylon, polythene, starch, cellulose, proteins, enzymes, etc. These substances when dissolved in a suitable liquid, directly from the colloidal solution. They have high molecular masses and have lyophobic character.
Associated colloids: The substances which when dissolved in a medium at low concentration behave as normal strong electrolytes but at higher concentration exhibit colloidal state properties due to the formation of aggregated particles are called associated colloids. The aggregated particles thus formed are called micelles.
Micelle formation takes place above a particular temperature called Kraft temperature (Tk) and above a particular concentration called Critical Micelle Concentration (CMC). These molecules contain both lyophilic and lyophobic groups.

Mechanism of micelle formation:
An example of the micelle is a soap solution. Soap is sodium or potassium salt of higher fatty acid and may be represented as RCOO–Na+. When dissolved in water, it dissociates into RCOO– and Na+ ions. The RCOO– ions consist of two parts – a long hydrocarbon chain R (also called non-polar ‘tail’) which is hydrophobic (water-repelling), and a polar group COO– (also called polar-ionic ‘head’), which is hydrophilic (water-loving).
The RCOO– ions are present on the surface with their COO– groups in water and the hydrocarbon chains (R) at the surface. But at critical micelle concentration, the anions are pulled into the bulk of the solution and aggregate to form a spherical shape. Thus, a micelle is formed.

Cleansing Action of Soaps: The cleansing action of soap is due to micelle formation. The soap molecules form micelle around the oil droplet in such a way that hydrophobic part is in the oil droplet and hydrophilic part projects out. Since the polar groups (hydrophilic end) can interact with water, the oil droplets are pulled in water and removed from the dirty surface. Thus, soap helps in emulsification and washing away of oils and fats.

(ii) Electrical disintegration (Bredig’s arc method): This method is used for the preparation of metal sols like Ag, Au, Pt etc. The metal whose sol is to be prepared is taken in the form of two rods and it is kept in a suitable dispersion medium containing a small amount of electrolyte. The whole arrangement is kept in an ice bath. When high voltage is passed through the metal, the intense heat produced vapourises the metal, which then condensed to form particles of colloidal dimension. 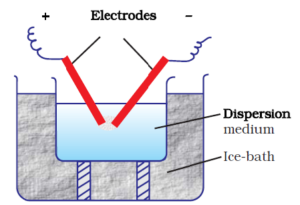 (iii) Peptisation: It is the process of converting a freshly precipitated substance into colloidal particles by shaking with a suitable electrolyte, e.g., Fe(OH)3 ppt with FeCl3 solution, AgI ppt with AgNO3 or KI solution and Al(OH)3 ppt . with an insufficient quantity of very dil. HCl solution. During peptization, the precipitate adsorbs one of the ions of the electrolyte on its surface resulting in the development of positive or negative charge on the precipitate, which ultimately breaks into particles of colloidal dimensions. 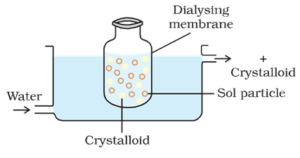 (ii) Electrodialysis: When the dialysis process is accelerated by the application of a potential difference across the membrane, so ions migrate faster than the colloids. 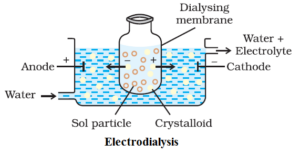 (iii) Ultra-filtration: Purification of colloidal solution using special filter paper called ultrafilters (filter paper which is impregnated with gelatin or collodion followed by hardening in formaldehyde). Collodion is a 4% nitrocellulose soln in alcohol and ether.