By Dr. Vikas JasrotiaDecember 17, 2021No Comments

Que 1. What do you mean by the term –Adsorption?
Ans 1. The accumulation of molecular species at the surface rather than in the bulk of a solid-liquid is termed Adsorption.

Que 2. Why does the solution of organic dye turn colourless when charcoal is added?
Ans 2. Because the molecules of the dye accumulate on the surface of charcoal and turn into the solution colourless.

Que 3. Explain the modern theory of heterogeneous catalysis.
Ans 3. According to the modern theory of catalysis, the mechanism of heterogeneous catalysis involves the following steps –
(i) Diffusion of reactants on the surface of the catalyst.
(ii) Adsorption of reactant molecules on the surface.
(iii) Occurrence of reaction on the catalysts surfaces through the formation of an intermediate. (iv) Desorption of products from the surface.
(v) Diffusion of products away from the surface.

Que 5. Define alcosol.
Ans 5. If the dispersed phase is solid and the dispersion medium is alcohol (liquid), the system is known as alcosol.

Que 7. Explain the terms: Adsorbate and Adsorbent with examples.
Ans 7. The molecular species which get concentrated or accumulated at the surface are adsorbate eg. O2, H2, CO, Cl2, NH3 etc. and the material on the surface of which the adsorption takes place is adsorbent. eg. Charcoal, silica gel, alumina gel, clay etc.

Que 8. Define the term – desorption?
Ans 8. The process of removing an adsorbed substance from a surface on which it is adsorbed is called desorption.

Que 9. Define the term Desorption?
Ans 9. The process of removing an adsorbed substance from a surface on which it is adsorbed is called desorption.

Que 11. Explain the mechanism of enzyme catalysis.
Ans 11. Mechanism of enzyme catalysed reactions:
There are active centres or cavities on the surface of enzyme particles. The molecules of the reaction or substrate which have complementary shapes fit into these just like a key fits into a lock. This forms an activated complex that decomposes to yield products. The reactions proceed in two steps – Step Step 1. Binding of enzymes(E) to substrate(S) to form an activated complex.
E + S → [E-S]
Step 2: Decomposition of complex to form products.
[E-S] → E + P

Que 12. Give the main difference between sol and gel.
Ans 12. Sol contains solids dispersed in liquid whereas gel contains liquid dispersed in solid.

Que 13. Why is it necessary to remove CO when ammonia is obtained by Haber’s process?
Ans 13. CO obtained in Haber’s process behaves as catalytic poison which stops the reaction and must be removed.

Que 16. Distinguish between the meaning of the terms adsorption and absorption. Give one example of each.
Ans 16. Adsorption is a surface phenomenon of the accumulation of molecules of a substance at the surface rather than in the bulk of a solid or liquid. The substance that gets adsorbed is called the ‘adsorbate’ and the substance on whose surface the adsorption takes place is called the ‘adsorbent’. Here, the concentration of the adsorbate on the surface of the adsorbent increases. In adsorption, the substance gets concentrated at the surface only. It does not penetrate through the surface to the bulk of the solid or liquid. For example, when we dip a chalk stick into an ink solution, only its surface becomes coloured. If we break the chalk stick, it will be found to be white from the inside. On the other hand, the process of absorption is a bulk phenomenon. In absorption, the substance gets uniformly distributed throughout the bulk of the solid or liquid.

Que 17. What is the difference between physisorption and chemisorption?
Ans 17.

Que 18. What is CMC?
Ans 18. CMC stands for critical micelle concentration and it is the minimum concentration above which the formation of micelles takes place.

Que 19. Why is the ester hydrolysis slow in beginning and becomes faster after some time?
Ans 19. Ester Hydrolysis
RCOOR’ + H2O → RCOOH + R’OH
The acid produced in the reaction acts as the catalyst (auto catalyst) for the reaction. Thus, the rate of reaction increases after some time.

Que 20. Name the factors which influence the extent of adsorption of a gas on a solid.
Ans 20. There are various factors that affect the rate of adsorption of a gas on a solid surface.
(i) Nature of the gas: Easily liquefiable gases such as NH3, HCl etc. are adsorbed to a great extent in comparison to gases such as H2, O2 etc. This is because Van der Waal’s forces are stronger in easily liquefiable gases.
(ii) Surface area of the solid: The greater the surface area of the adsorbent, the greater is the adsorption of a gas on the solid surface.
(iii) Effect of pressure: Adsorption is a reversible process and is accompanied by a decrease in pressure. Therefore, adsorption increases with an increase in pressure.
(iv) Effect of temperature: Adsorption is an exothermic process. Thus, in accordance with Le-Chatelier’s principle, the magnitude of adsorption decreases with an increase in temperature.

Que 23. What is the role of desorption in the process of catalysis?
Ans 23. Due to desorption, the products of the reaction get detached from the catalyst surface, thereby making the surface available again for more reaction.

Que 25. Explain the Mechanism of adsorption.
Ans 25. Adsorption arises due to the presence of unbalanced forces or residual attractive forces on the particles of the surface. These forces are responsible for attracting the adsorbate particles on its surface and they cause the adsorption.

(iii) On the basis of the nature of the interaction between the dispersed phase and dispersion medium, the colloids can be classified as lyophilic (solvent attracting) and lyophobic (solvent repelling).

Que 29. Define the term ‘Tyndall effect.
Ans 29. On placing a homogeneous solution placed in dark is observed in the direction of light, it appears clear and, if it is observed from a direction at right angles to the direction of the light beam, it seems perfectly dark. Colloidal solutions viewed in the same way may also appear reasonably clear or translucent by the transmitted light but they show a mild to strong opalescence when viewed at right angles to the passage of light, i.e., the path of the beam is illuminated by a bluish light. This effect was first observed by Faraday termed as the Tyndall effect. 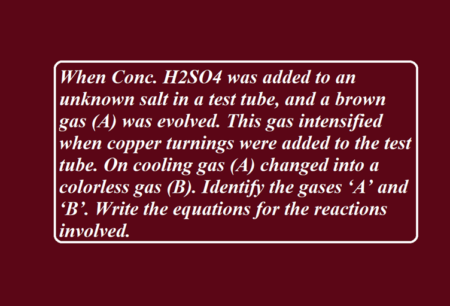