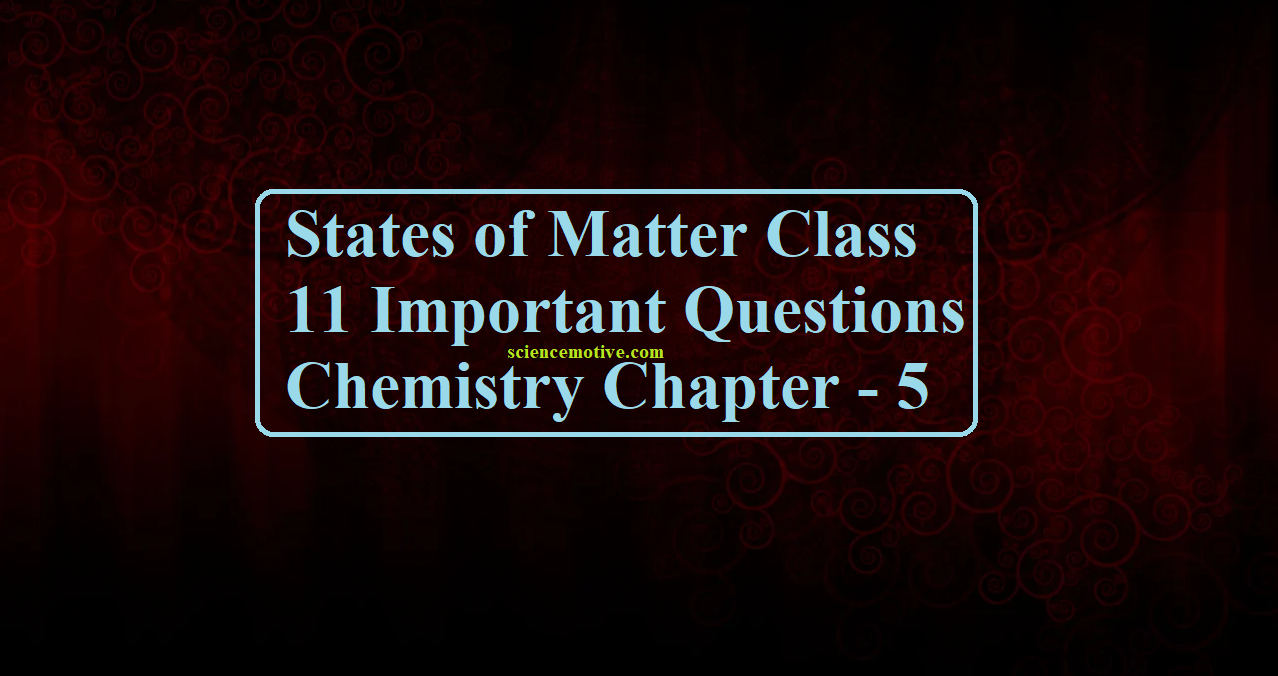 Que 2. What is Absolute Zero?
Ans 2. It is the lowest temperature theoretically possible at which the volume of a perfect gas is zero.

Que 4. What is the effect of an increase of temperature on surface tension and viscosity in a liquid?
Ans 4. Both decrease with an increase in temperature.

Que 5. Why vegetables are cooked with difficulty at hill stations?
Ans 5. At the hill station, the atmospheric pressure is less and so the boiling point decreases.

Que 7. What is the difficulty faced by the mountaineers with respect to the air present around them? How is this difficulty solved?
Ans 7. At altitude, the atmospheric pressure is low. Hence, the air is less dense. As a result, less oxygen is available for breathing. The person feels uneasiness, headache etc. This is called altitude sickness. This difficulty is solved by carrying oxygen cylinders with them.

Que 8. Boyle’s law states that at a constant temperature if pressure is increased on a gas, volume decreases and vice versa. But when we fill the air in a balloon, volume as well as pressure increase. Why?
Ans 8. The law is applicable only for a definite mass of the gas. As we fill air into the balloon, we are introducing more and more air into the balloon. Thus, we are increasing the mass of air inside. Hence, the law is not applicable.

Que 10. What is Boyle Temperature?
Ans 10. The temperature at which a real gas exhibits ideal behaviour for a considerable range of pressure is called Boyle’s temperature.

Que 11. What would have happened to the gas if the molecular collisions were not elastic?
Ans 11. On every collision there is a loss of energy, so molecules would have slowed down & settled down in the vessel and pressure reduce to 0.

Que 12. Why do liquids diffuse slowly as compared to gases?
Ans 12. In liquids, the molecules are less free than in a gas. i.e intermolecular forces in liquid are greater than in gas.

Que 13. A tyre tube with a pinhole is first filled with oxygen to a pressure of 30 lb/sq inch and allowed to leak out. Then it is filled with N2 gas to the same pressure and allowed to leak out again. In which case, the time taken will be more and why?
Ans 13. The time taken will be more in case the tyre tube is filled with O2. This is because O2 has a higher molar mass than N2 and the rate of effusion is inversely proportional to the square root of molar mass.

Que 15. Why do liquids have a definite volume but no definite shape?
Ans 15. This is because the intermolecular forces are strong enough to hold the molecules together but not so strong as to fix them into definite positions (as in solids). Instead, they possess fluidity and hence no definite shape.

Que 16. What would have happened to the gas if the molecular collisions were not elastic?
Ans 16. On every collision, there would have been a loss of energy. As a result, the molecules would have slowed down and ultimately settle down in the vessel. Moreover, the pressure would have gradually reduced to zero.

Que 17. Explain the following
(a) Why are aerated water bottles kept underwater during summer?
(b) Which property of liquid is responsible for the spherical shape of drop?
(c) Why is moist air lighter than dry air?
(d) Define aqueous tension?
(e) What are units of a and b which are van der Waal’s constant?
Ans 17. (a) To reduce the temperature so as to reduce pressure, otherwise, the bottle may burst.
(b) Surface Tension.
(c) Moist air has water vapours which lower vapour density, so it is lighter.
(d) It is the pressure of water vapours at a given T.
(e) Unit of a in atm. L2 mol-2, b is L mol-1.

Que 19. Give reasons for the following.
(i) The size of a weather balloon becomes larger and larger as it ascends into higher altitudes.
(ii) Tyres of automobiles is inflated to lesser pressure in summer than in winter.
Ans 19. (i) As we go to higher altitudes, the atmospheric pressure decreases. Thus, the pressure outside the balloon decreases. To regain equilibrium with the external pressure, the gas inside expands to decrease its pressure, Hence, the size of the balloon increases.
(ii) In summer, due to higher temperature, the average kinetic energy of the air molecules inside the tyre increase, i.e., molecules start moving faster. Hence, the pressure on the wall of the tube increases. If the pressure inside is not kept low at the time of inflation, at a higher temperature, the pressure may become so high that the tyre may burst.

Que 21. Ice has a lower density than water. Give a reason.

Ans 21: It is because of the presence of different types of hydrogen bonding in both of the compounds. Ice consists of intermolecular hydrogen bonding and a cage-like 3D structure. When ice melts, some hydrogen bonds break, allowing water molecules to fill the empty gaps. The molecules in liquid water are more densely packed than those in ice. As a result, ice is denser than water.

Que 22. What is meant by the term: Non-ideal or real gas?
Ans 22. The gas which does not obey the Cas law:
Boyle’s law, Charles’ law, Avogadro law at all temperatures and pressures is a called-non-ideal or real gas. Most of the real gases show ideal behaviour at low pressure and high temperature.

Que 27. What are the postulates of the kinetic theory of gases?

Ans 27. The important postulates of the theory are:

i. All gases are made up of a very large number of minutes particles called molecules.

iii. The molecules are in a state of constant rapid motion in all directions. During their motion, they keep on colliding with one another and. also with the walls of the container and, thus, change their directions.

iv. Molecular collisions are perfectly elastic, no loss of energy occurs when the molecules collide with one another or with the walls of the container. However, there may be. redistribution of energy during the collisions.

v. There are no forces of interaction (attractive or repulsive) between molecules. They move completely independent of one another.

vi. The pressure exerted by the gas is due to the bombardment of its molecules on the walls of the container per unit area.

vii. The average kinetic energy of the gas molecules is directly proportional to the absolute temperature.

Que 28. Mention the two assumptions of the kinetic theory of gases that do not hold good.

Ans 28. The two assumptions of the kinetic theory that do not hold good are:

i. Molecules of a gas do not have any force of attraction between them.

ii. The volume of the molecules of a gas is negligibly small when compared to the space which is occupied by the gas.

Que 30. Why falling liquid drops are spherical?
Ans 30. The surface area of a sphere is minimum. In order to have minimum surface area drops of the liquid become spherical.