1. Read the passage given below and answer the following questions:

The modern periodic table arranges the elements in the increasing order of atomic number. It has 18 groups and 7 periods. Atomic numbers are consecutive in a period and increases in the group in a pattern. Elements are divided into four blocks, s-block, p-block, d-block, and f-block based on their electronic configuration. 78% of elements are metals, about 20 elements are non-metals, and few elements like B, Si, Ge, As are metalloids. Metallic character increases down the group but decreases along the period from left to right. The physical and chemical properties vary periodically with their atomic numbers. Periodic trends are observed in atomic size, ionization enthalpies, electron gain enthalpies, electronegativity, and valence. Oxides of metals are basic, some are amphoteric. Non-metals form acidic oxides, some form neutral oxides. s-block elements are soft, highly reactive, do not show variable oxidation states. p-block elements are metals, non-metals as well as metalloids, show variable oxidation states, exist as solids, liquids, and gases. d-block elements are metals, form coloured ions, show variable oxidation states, have high melting and boiling points. Lanthanoids and actinoids are f-block elements, form coloured ions. All actinoids are radioactive.

The following questions are multiple-choice questions. Choose the most appropriate answer:
(a) Name the elements which belong to d-block but are not transition metals.
Ans. Zn, Cd, Hg.

(d) What happens to reactivity down group 17?
Ans. Reactivity goes on decreasing down the group as a tendency to gain electrons decreases.

2. Read the passage given below and answer the following questions:
In view of the shortcomings of Bohr’s Model of atom, efforts were made to develop a new model of the atom which could overcome the limitations of Bohr’s Model. The development of the new model was mainly based on (i) de Broglie’s concept of the dual nature of matter (ii) Heisenberg’s uncertainty principle.
The new branch of science which was developed taking into consideration the above two concepts is known as Quantum mechanics.

In these questions (Q) No. i-iv, a statement of Assertion followed by a statement of reason is given. Choose the correct answer out of the following choices.

(i). Assertion: It is impossible to determine the exact position and exact momentum of an electron simultaneously.
Reason: The path of an electron in an atom is clearly defined

Assertion: An electron can never be found in the nucleus.
Reason: Uncertainty in the position of an electron is greater than 10-15m

Following questions (No.3-11) are multiple-choice questions carrying 1 mark each

3. In which mode of expression, the concentration of a solution remains independent of temperature?
(a) Molarity
(b) Normality
(c) Formality
(d) Molality
Ans 3. (d) Molality

In these questions (Q) No.12-16, a statement of Assertion followed by a statement of reason is given. Choose the correct answer out of the following choices.

12. Assertion (A): Combustion of 16g of methane gives 18g of water.
Reason (R): In the combustion of methane, water is one of the products.

13. Assertion (A): The empirical mass of ethene is half of its molecular mass.
Reason (R): The empirical formula represents the simplest whole-number ratio of various atoms present in a compound.

The following questions, Q. No. 17-25 are short answer type and carry 2 marks each.

17. Explain why BeH2 has zero dipole moment although Be-H bonds are polar.
Ans 17. The dipole moment of BeH2 is zero because the two equal bond dipoles point in opposite directions and cancel the effect of each other. 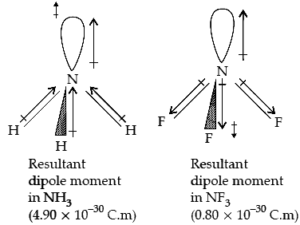 18. Using the equation of state PV = nRT shows that at a given temperature density of a gas is proportional to gas pressure p.
Ans. PV = nRT =w​RT/M
Hence, PM = w​RT/V = ρRT
ρ∝P
Here, ρ = w/V​
n = w/M​
ρ is the density, P is the pressure, V is the volume, n is the number of moles, R is the ideal gas constant, T is the temperature and M is the molar mass.

19. Although both CO2and H2O are triatomic molecules, the shape of the H2O molecule is bent while that of CO2is linear. Explain this on the basis of dipole moment.
Ans 19:  In CO2, there are two C=O bonds. Each C=O bond is a polar bond.
The net dipole moment of the CO2 molecule is zero. This is possible only if CO2 is a linear molecule. (O=C=O). The bond dipoles of two C=O bonds cancel the moment of each other.
Whereas, H2O molecule has a net dipole moment (1.84 D). H2O molecule has a bent structure because here the O—H bonds are oriented at an angle of 104.5° and do not cancel the bond moments of each other. Write the electronic configuration of Cr (Z=24) and Cu (Z=29).

20. Out of Na and Mg, which is expected to have higher second ionization enthalpy?
Ans 20. The electronic configuration of both sodium and magnesium are as such:
Na – 2, 8, 1 (3s¹)
Mg – 2, 8, 2 (3s²)
Here, Na has one valence electron in 3s¹, and by losing this one electron it can attain its octet state, thus becoming stable. But if Mg loses one electron, it would still have another electron left in its outermost shell. As a result, the first ionization enthalpy of Na is lower than that of Mg.
Again, now that Na has reached its stable configuration of Neon, Mg has just one electron left in its outermost shell, and by losing it, it will also attain a stable configuration of Neon. But if Na loses one more electron, it will be left with 7 more electrons in it’s L shell, thus becoming unstable once again. As a result, the second ionization enthalpy of Na is higher than that of Mg.

21. Calculate the wave number for the longest wavelength transition in the Balmer series of atomic hydrogen.
Ans 21. 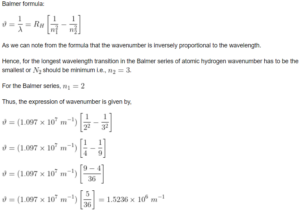 22. (a) How will you convert Benzene into
i). Acetophenone
ii). m-nitro chlorobenzene
Ans 22. (i). Benzene reacts with acetyl chloride in the presence of anhydrous AlCl3 to give Acetophenone.

(ii). Benzene reacts with conc. HNO3 of conc. H2SO4 to give nitrobenzene which further reacts with chlorine in the presence of anhydrous AlCl3 to give m-nitro chlorobenzene.

(b) Write the structure of the product obtained by ozonolysis of pent-2-ene.
Ans 22 (b). 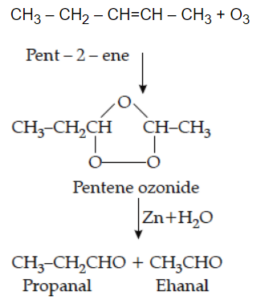 Give chemical equations for:
i). Decarboxylation reaction 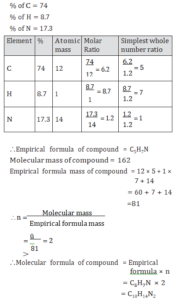 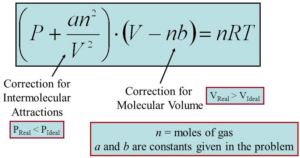 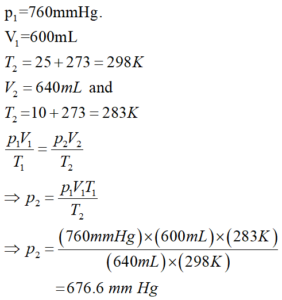 28. (a) State Heisenberg’s Uncertainty Principle.
Ans 28 (a). It states that it is impossible to determine simultaneously the exact position and exact momentum (or velocity) of an electron.
(b) Write down the electronic configuration of Chromium (Z=24).
Ans (b). Electronic configuration of 24Cr
= 2, 8, 13, 1 =1s2, 2s22p6, 3s23p63d5, 4s1
(c) State Hund’s Rule of maximum multiplicity.
Ans (c). It states that pairing of electrons in the orbitals belonging to the same subshell (p, d, or f) does not take place until each orbital belonging to that subshell has got one electron each i.e. it is singly occupied.

31. (a) Describe briefly the structure of C2H4 on the basis of hybridization.
Ans 31 (a). The carbon-carbon double bond in ethene (C2H4) consists of one σ – bond due to head-on overlapping of sp2 hybridized orbitals and one π – bond obtained by sideways overlapping of the two 2p orbitals of the two carbon atoms. The structure of C2H4 is shown below: 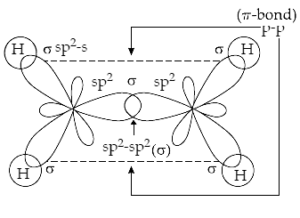 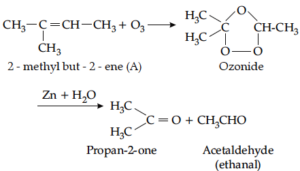 (a) Write short notes on (i) Friedel Crafts acylation of Benzene
(ii) Decarboxylation
Ans. (i). 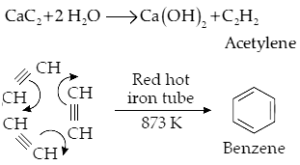 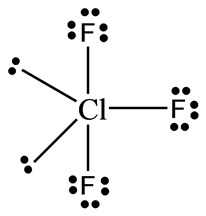 (b) A mixture of dilute NaOH and aluminium pieces is used to open a jammed drain. Why?
Ans. Dilute NaOH reacts with aluminium pieces to form sodium tetrahydroxo aluminate (III) and hydrogen gas. The pressure of hydrogen gas, so produced, is used to open a jammed drain.
(c) What are silicones? How they are prepared?
Ans. They are a group of organosilicon polymers, which have -R2SiO- as a repeating unit. The starting materials for the manufacture of silicones are alkyl or aryl substituted silicon chlorides, RnSiCl(4-n), where R = alkyl or aryl group.
Preparation of silicones:
When methyl chloride reacts with silicon in the presence of copper as a catalyst at 573K, various types of methyl-substituted chlorosilanes are obtained with a small amount of Me4Si. Hydrolysis of dimethyldichlorosilane followed by condensation polymerization forms silicone. 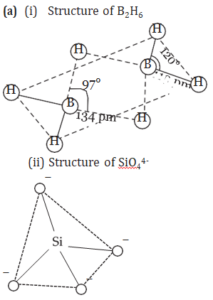 (b) A compound A reacts with lithium aluminum hydride (LiAIH4) to form a boron hydride (B). On hydrolysis with water, B forms boric acid and with heating with ammonia, it forms inorganic benzene (C). Identify A, B, and C and write the chemical equations.
Ans (b). Since compound A reacts with   LiAlH4   to form boron hydride. So, compound A may be boron trifluoride and compound B is diborane. Diborane on heating with NH3 to form inorganic benzene (C), which is borazine. 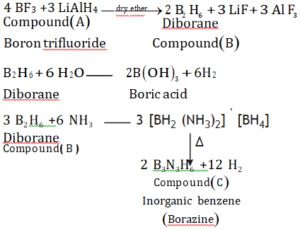