By Dr. Vikas JasrotiaNovember 14, 2020No Comments 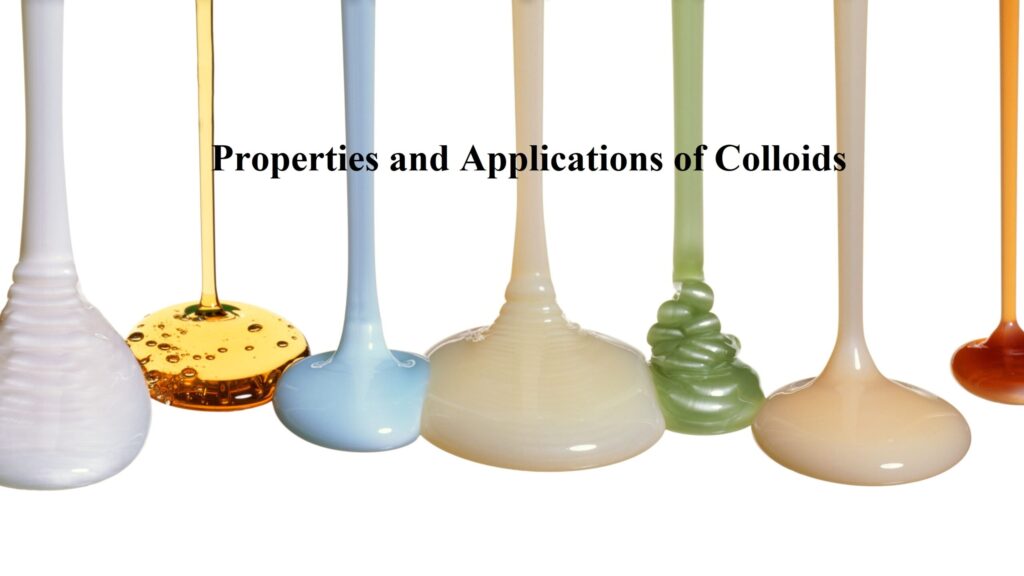 (ii) Visibility: The particles are too small to be seen with the naked eye but become visible when viewed through an ultra-microscope due to the scattering of light by them.

(iv) Tyndall Effect: When a light beam is passed through a colloidal solution, we can see the path of the light beam. This phenomenon is known as the Tyndall effect. It is due to the scattering of a light beam by colloidal particles. The visible path is called the Tyndall cone.

(v) Brownian movement: Zig-zag movement of colloidal particles due to the collision between particles of dispersed phase & dispersion medium, responsible for the stability of colloids. Stability of Colloidal Sols: All the dispersed particles in a colloid carry the same charge (either positive or negative) while the dispersion medium has an equal and opposite charge. The particles, therefore, repel one another and do not come close together to form large non-colloidal particles.

The charge on the sol particles is mainly due to the preferential adsorption of ions from the solution. When 2 or more ions are present in the dispersion medium, preferential adsorption of the ion common to the colloidal particle takes place. e.g. When AgNO3 is added to KI, AgI is precipitated, which adsorbs iodide ions from the dispersion medium and thus get a negative charge.
But when KI is added to AgNO3, the precipitated AgI adsorbs Ag+ ions from the solution and thus get a positive charge.

Due to the positive or negative charge in the sol particles, they attract the counterions (opposite ions) from the medium. Thus, a double layer of opposite charges is formed. This is known as a Helmholtz electrical double layer. The layer in which the ions are directly adsorbed to the sol particles is termed as a fixed layer. The second layer is mobile and is termed a diffused layer. Coagulation of colloidal solutions: Process of settling of colloidal particles into precipitate by addition of electrolytes. This can be done in different ways:

Emulsions:  It is a colloidal dispersion in which both the dispersed phase and the dispersion medium are liquids (which are otherwise immiscible). Substances like soaps which help in making the emulsions stable are called emulsifiers or emulsifying agents.

Dye test to distinguish between Emulsions: 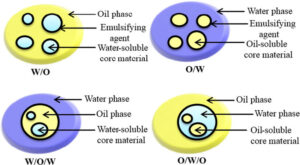 Demulsification: The process of breaking an emulsion to yield constituent.

Properties and Applications of Colloids
Applications of Colloids:
(1) Formation of Delta: Deltas are formed at the river mouth. This is because the river water is a negatively charged colloid of sand particles. When this water enters into the sea, the positive ions present in seawater coagulate the colloidal solution of sand and so the particles settle down. This will result in the formation of the delta. 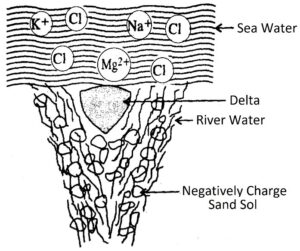 (2) Electrical precipitation of smoke (Cottrell precipitation): Smoke is a colloidal solution of carbon, arsenic compounds, dust particles etc. in the air. The smoke before coming out of the chimney is passed through a chamber (Cottrell precipitator) containing plates having a charge opposite to that of smoke particles. Thus, neutralization of charges occurs and the particles settle down and pure air flows out of the chimney. 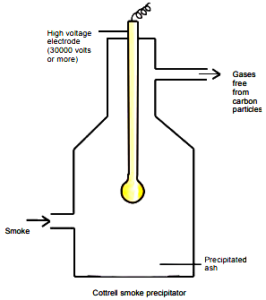 (3) Purification of drinking water: The water obtained from natural sources often contains suspended impurities. In order to coagulate these impurities, alum is added to water. The positive ions present in alum neutralize the suspended impurities and hence get purified.

(4) Medicines: Most of the medicines are colloidal in nature. This is because they have a large surface area and are therefore easily assimilated. For example, Argyrol is a silver sol used as an eye lotion. Colloidal antimony is used in curing kala-azar (Visceral disease, the most devastating and fatal form of leishmaniasis, is classically known as kala-azar or the Indian name for “black fever/disease). Colloidal gold is used for intramuscular injection.

(5) Tanning: Animal hides are colloidal in nature. When a hide, which has positively charged particles, is soaked in tannin (which contains negatively charged colloidal particles) mutual coagulation takes place. This results in the hardening of leather. This process is termed as tanning.

(7) Rubber industry: Rubber latex is a colloidal solution of rubber particles that are negatively charged. Rubber is obtained by coagulation of the latex.

(9) Blood: Blood is a colloidal solution of an albuminoid substance. When alum and ferric chloride (FeCl3) solution are added to blood, then coagulation of particles takes place which results in the clotting of blood.