By Dr. Vikas JasrotiaOctober 16, 2020No Comments 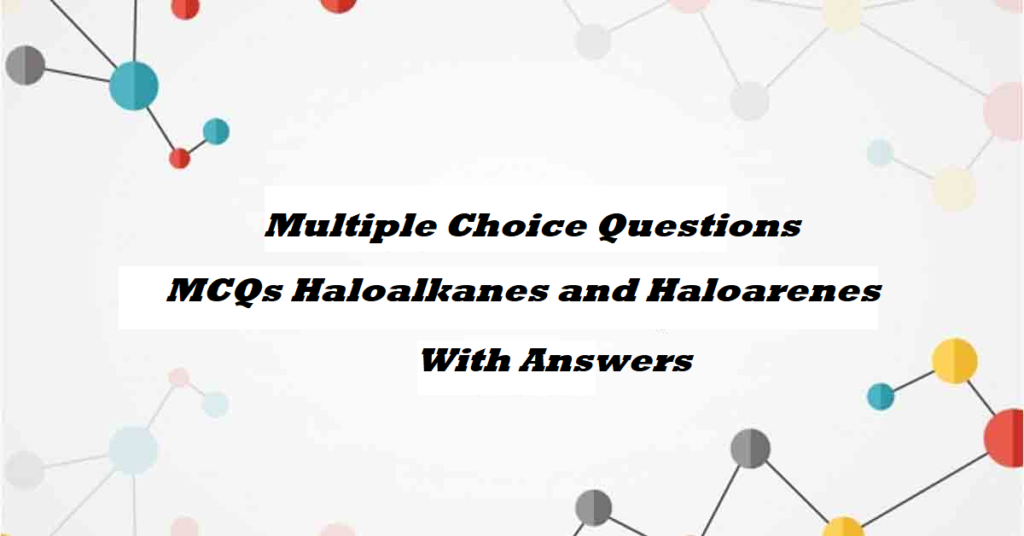 Q 2. Which of the following alcohols will yield the corresponding alkyl chloride on
reaction with concentrated HCl at room temperature?
(i) CH3CH2—CH2 —OH 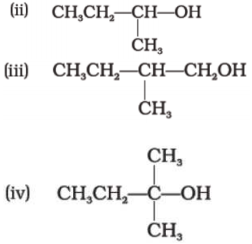 Ans. (iv)
Explanation: The reactions of primary and secondary alcohols with HCl require the
presence of a catalyst, ZnCl2. With tertiary alcohols, the reaction is conducted by simply
shaking with concentrated HCl at room temperature. The order of reactivity of alcohols
with a given haloacid is 3o>2o>1o

Q 3. Identify the compound Y in the following reaction.

Ans. (i)
Explanation: The Cl-, Br-and CN- nucleophiles can easily be introduced in the benzene
ring of diazonium salts in the presence of Cu(I) ion.

Ans. (ii)
Explanation: Aryl Chlorides and bromides can be easily prepared by electrophilic
substitution of arenes with chlorine and bromine respectively in the presence of Lewis
acid catalysts like iron or iron (III) chloride.

Q6. Which of the following structures is enantiomeric with the molecule (A) given
below : 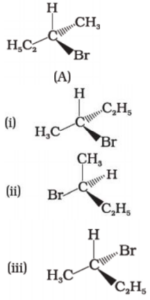 Ans. (i)
Explanation: The stereoisomers related to each other as non-super impossible mirror
images are called enantiomers. Enantiomers possess identical physical properties.

Q 7. Which of the following is an example of vic-dihalide?
(i) Dichloromethane
(ii) 1,2-dichloroethane
(iii) Ethylidene chloride
(iv) Allyl chloride

Ans. (i)
Explanation: These are the compounds in which the halogen atoms are bonded to an sp3-
hybridised carbon atom next to carbon-carbon double bond (C=C) i.e., to an allylic
carbon.

Q 9. Chlorobenzene is formed by the reaction of chlorine with benzene in the presence of
AlCl3. Which of the following species attacks the benzene ring in this reaction?
(i) Cl–
(ii) Cl+
(iii) AlCl3
(iv) [AlCl4]-

Ans. (iii)
Explanation: In this reaction addition of HCl takes place on the doubly bonded carbon atom
in accordance with Markovnikov’s rule i.e., the addition of negative species will take place
on the carbon which has a lesser number of hydrogen.

Ans. (ii)
Explanation: SN2type (bimolecular nucleophilic substitution). These reactions proceed
in one step and the rate of reaction depends on the concentration of alkyl halide as well as
nucleophile i.e. r=k[RX][Nu]. It is a second-order reaction. During SN2 reaction inversion in configuration occurs i.e., starting with dextrorotatory halide a laevo product is obtained, and vice-versa.

Ans. (iv)
Explanation: SN1 type (unimolecular nucleophilic substitution). These reactions proceed
in two steps. The rate of reaction is dependent on step 1 i.e., only on the concentration of
alkyl halide r =k [RX]. It is a first-order reaction.
R———X bond length in case of iodine is highest and that is why lowest bond dissociation enthalpy. Therefore, I- is known as the best leaving group.

Ans. (i)
Explanation: The objects which are non-superimposable on their mirror images are
called enantiomers. It occurs on that molecule which contains asymmetric carbon or
chiral i.e., a carbon atom attached with four different groups.

Q 16. Reaction of C6H5CH2Br with aqueous sodium hydroxide follows ____________.
(i) SN1 mechanism
(ii) SN2 mechanism
(iii) Any of the above two depending upon the temperature of the reaction
(iv) Saytzeff rule

Explanation: Greater the stability of carbocation, the greater will be its ease of formation from an alkyl halide and faster will be the rate of reaction. In the case of alkyl halides, 30 alkyl
halides undergo SNl reaction very fast because of the high stability of 30 carbocations.
For the same reasons, allylic and benzylic halides show high reactivity towards the SNl
reaction. The carbocation thus formed gets stabilized through resonance

Ans. (i)
Explanation: For the same alkyl group, the boiling points of alkyl halides decrease in the
order: RI>RBr>RCl>RF. This is because, with the increase in size and mass of the halogen
atom, the magnitude of van der Waal forces increases.

Ans. (iv)
Explanation: The attractions get stronger as the molecules get bigger in size and have
more electrons.

In the following questions, two or more options may be correct. Consider the
following reaction and answer the questions no. 19-21.

Ans. (i) and (iv)
Explanation: In the transition state, the carbon atom is simultaneously bonded to the incoming nucleophile and the outgoing leaving group and such structure are unstable and cannot be isolated. This is because the carbon atom in the transition state is simultaneously bonded to five atoms and therefore is unstable.