By Dr. Vikas JasrotiaOctober 8, 2020No Comments 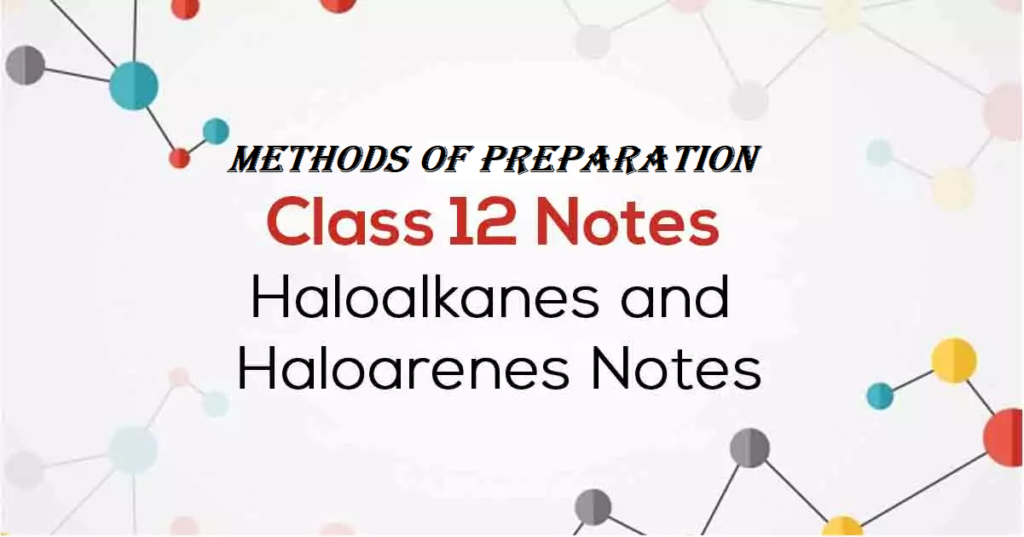 c). Alkyl chlorides are obtained by the action of thionyl chloride (SOCl2) with alcohol.
R − OH + SOCl2 → R − Cl + SO2 (g) + HCl(g)
Among these methods, the reaction with thionyl chloride (SOCl2) is preferred, since the byproducts are gases and are easily escaped from the reaction medium.
Among the Haloalkanes and Haloarenes, the preparation of aryl halide from phenols becomes difficult since the carbon-oxygen bond in phenols has a partial double bond character and hence is difficult to break.

(a) By free radical halogenation: Free radical chlorination or bromination of alkanes in presence of light gives a complex mixture of isomeric mono- and polyhaloalkanes, which is difficult to separate as pure compounds. Consequently, the yield of any one compound is low.
CH4 + Cl2 → CH3Cl + CH2Cl2 + CHCl3 + CCl4

b).  Addition of Halogen:  Alkenes add halogen to form vicinal dihalides (2 halogen atoms on adjacent C atoms). For e.g. addition of bromine in CCl4 to an alkene results in the formation of vicinal dibromides and also in the discharge of the reddish-brown colour of Br2 in CCl4. So this is used as a test for unsaturation.
CH2=CH2 + Br2  →  CH2Br – CH2Br
(1,2-dibromoethane)

In order to check Haloalkanes and Haloarenes, part 1 click the link given below