By Dr. Vikas JasrotiaFebruary 8, 2021No Comments

1. Solutions are the homogeneous mixtures of two or more than two components.

3. When the solvent is in solid-state, the solution is called a solid solution.

4. When the solvent is in liquid state, solution is called liquid solution.

5. When the solvent is in gaseous state, solution is called gaseous solution.

7. Mass by volume percentage (w/v): Mass of the solute dissolved in100 mL of solution.

8. Molality (m) is the number of moles of solute present in 1kg of solvent.

9. Molarity (M) is the number of moles of solute present in 1L of solution.

10. Normality (N) is the number of gram equivalent of solute dissolved per litre of solution.

11. Solubility is its maximum amount that can be dissolved in a specified amount of solvent at a specified temperature.

12. A solution in which no more solute can be dissolved at the same temperature and pressure is called a saturated solution.

13. In a nearly saturated solution if the dissolution process is an endothermic process, solubility increases with increase in temperature.

14. In a nearly saturated solution if the dissolution process is an exothermic process, solubility decreases with increase in temperature.

16. When a non-volatile solute is dissolved in a volatile solvent, the vapour pressure of the solution is less than that of pure solvent.

18. On comparison of Raoult’s law and Henry’s law, it is observed thatthe partial pressure of volatile component or gas is directly proportional to its mole fraction in solution. In the case of Henry’s Law, the proportionality constant is KHand it is different from p0  which is the partial pressure of pure component. Raoult’s Law becomes a special case of Henry’s Law when KH becomes equal to  p01 in Henry’s law.

19. Liquid–liquid solutions can be classified into ideal and non-ideal solutions on basis of Raoult’s Law.

21. Azeotropes are binary mixtures having the same composition in the liquid and vapour phase and boil at a constant temperature. Liquids forming azeotrope cannot be separated by fractional distillation.

23. The solutions which show a large positive deviation from Raoult’s law form minimum boiling azeotrope at a specific composition.

25. Properties of solution which depends on only the number of solute particles but not on the nature of solute are called colligative properties.

30. For a dilute solution depression in freezing point is a colligative property because it is directly proportional to molal concentration of solute.

31. Osmosis: The phenomenon of flow of solvent molecules through a semi-permeable membrane from pure solvent to the solution is called Osmosis.

33. Osmotic pressure can also be used to determine the molar mass of solute using the equation
M2 =  w2RT/Pi V

34. Two solutions having the same osmotic pressure at a given temperature are called an isotonic solution.

35. If a solution has more osmotic pressure than other solution it is called a hypertonic solution.

36. If a solution has less osmotic pressure than other solution it is called a hypotonic solution.

38. Colligative properties help in the calculation of the molar mass of solutes. 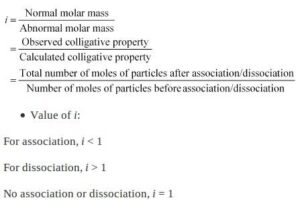