By Dr. Vikas JasrotiaNovember 10, 2020No Comments Poisions are those substances that decrease the activity of catalyst are called catalytic poisons or inhibitors. Eg- arsenic acts as a catalytic poison in the manufacture of sulphuric acid by contanct process.

Homogeneous Catalysis
A catalytic process in which the reactants and the catalyst are in the same phase (i.e., liquid or gas), is said to be homogeneous catalysis.
e.g.: In the lead chamber process for the manufacture of Sulphuric acid, oxidation of sulphur dioxide into sulphur trioxide is done in the presence of Nitric Oxide as a catalyst.
2SO2+ O2 → SO3

Adsorption Theory of Heterogeneous Catalysis:
This theory explains the mechanism of heterogeneous catalysis. According to this theory, the catalytic activity takes place on the surface of the catalyst. The mechanism involves five steps: 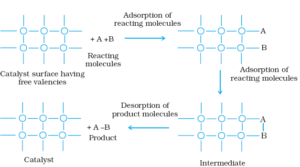 Shape-Selective Catalysis by Zeolites: The catalytic reaction that depends upon the pore structure of the catalyst and the size of the reactant and product molecules is called shape-selective catalysis.  Zeolites are good shape-selective catalysts because of their honeycomb-like structures. They are microporous aluminosilicates with three-dimensional networks of silicates in which some silicon atoms are replaced by aluminium atoms. They contain Al–O–Si framework. The reactions taking place in zeolites depend upon the size and shape of reactant and product molecules as well as upon the pores and cavities of the zeolites. They are found in nature as well as prepared artificially.

Zeolites are used as catalysts in petrochemical industries for the cracking of hydrocarbons and isomerisation. An important zeolite catalyst used in the petroleum industry is ZSM-5. It converts alcohols directly into gasoline (petrol) by dehydrating them to give a mixture of hydrocarbons.

Enzyme Catalysis:
Enzymes are complex nitrogenous organic compounds that are produced by living plants and animals. They are actually protein molecules of high molecular mass. They are very effective catalysts and catalyse numerous reactions taking place in plants and animals. So enzymes are also called Biochemical Catalysts and the phenomenon is known as Biochemical Catalysis.
For Example:
(i) Inversion of cane sugar: The enzyme invertase converts cane sugar into glucose and fructose.
C12H22O11(aq)  +   H2O(l)  →   C6H12O6(aq) + C6H12O6(aq)
(ii) Conversion of glucose into ethyl alcohol: The enzyme zymase converts glucose into ethyl alcohol and carbon dioxide.
C6H12O6(aq)   →    2C2H5OH(aq)  +  2CO2(g)

Characteristics of Enzyme Catalysis:
(i) Enzymes are specific in action.
(ii) The optimum temperature for enzymatic action is 298 to 310 K.
(iii) They show maximum activity near pH 5 – 7.
(iv) The enzymatic activity is increased in the presence of certain substances, known as co-enzymes.
(v) Enzyme activity is highly efficient. i.e., one molecule of an enzyme may transform one million molecules of the reactant per minute.

Mechanism of Enzyme Catalysis:
This theory is known as lock and key theory. Thus, the enzyme-catalysed reactions may be considered to proceed in two steps.
Step 1: The enzyme combines with the substrate to form an activated complex.

Step 2: Decomposition of the activated complex to form the product.

The schematic representation of the mechanism of enzyme catalysis is as follows: