By Dr. Vikas JasrotiaOctober 22, 2021No Comments 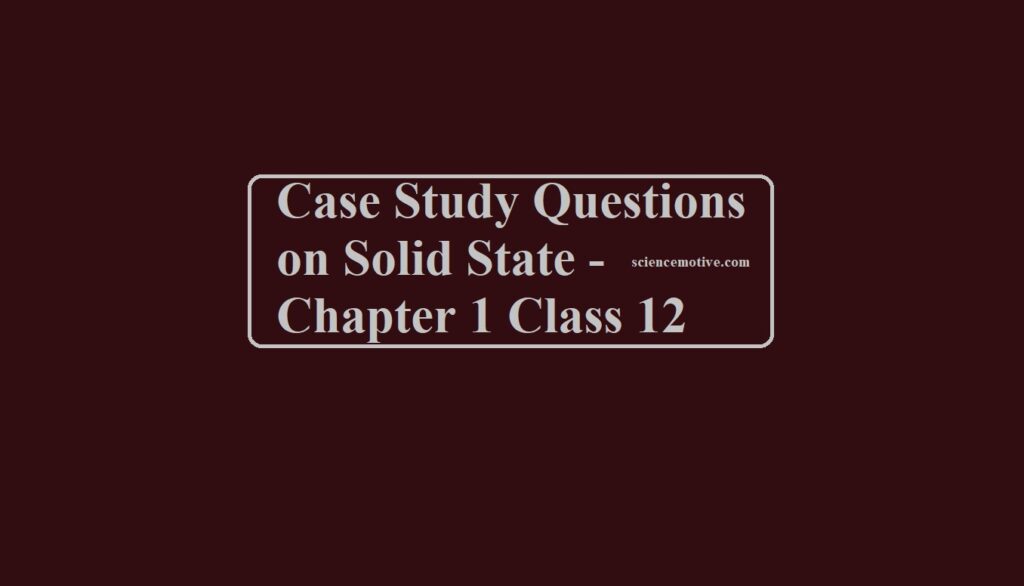 2. Read the following passage and answer the questions that follow:
Solids may be classified as amorphous and crystalline. Amorphous solids are isotropic whereas crystalline solids are anisotropic. Solids can also be classified on the basis of type of forces of attraction as ionic, covalent, metallic and molecular solids. Unit cells represent crystal lattice. Types of crystal lattice-bcc, fcc, simple cubic, end centred cubic are most common in seven crystal systems and 14 bravais lattices. The constituent particles arrange in square close packing, bcc, fcc, hcp. The packing efficiency of hcp and fcc is 74%, bcc 68% and simple cubic packing (52%). The vacant sites in packing are called voids, tetrahedral and octahedral being most common. The density of solids can be calculated by using

There are defects in the crystal lattice, point defects like Frenkel and Schottky. Non-stoichiometric defects are metal excess type and metal deficient type and impurity defects. These defects affect the properties of solids. Solids may be paramagnetic, diamagnetic, ferromagnetic, ferrimagnetic depending upon the presence of unpaired electrons. Solids may be conductors, insulators, semiconductors (n-type and p-type) formed by doping (adding group 13 or 15 as impurity), band theory can explain conductors, semiconductors and insulators.
Que 1. Which type of defects are shown by ZnS?
Ans 1. Frenkel defect.
Que 2. A given metal has an fcc structure with an edge length of 361 pm. What is the radius of an atom?
Ans 2. We know

Que 3. A compound is formed by cation ‘C’ which occupy 75% of octahedral voids and anion ‘A’ form hcp. What is the formula of a compound?
Ans 3. C3A4
Que 4. What is a forbidden zone?
Ans 4. The energy gap between the conduction band and valence band is large in insulators called a forbidden zone.
Que 5. Give one ferrimagnetic mixed oxide.
Ans 5. Fe3O4 is ferrimagnetic.
Que 6. What happens when ZnO is heated and why?
Ans 6. It becomes yellow due to metal excess defect.
Que 7. What type of solid is silicon carbide (Carborundum)?
Ans 7. Covalent solid

3. Study the diagram given below and answer the following questions: 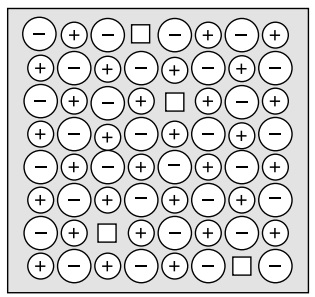 In these questions, a statement of Assertion followed by a statement of Reason is given. Choose the correct answer out of the following choices.
(A) Both A and R are true and R is the correct explanation of A
(B) Both A and R are true but R is NOT the correct explanation of A
(C) A is true but R is false
(D) A is false and R is True
Que 1. Assertion (A): The diagram shows the Schottky defect. Reason
Reason (R): Schottky defect occurs in ionic solids.
Ans 1. (B)
Reason: The diagram shows the Schottky defect as it has an equal number of cationic and anionic vacancies.
Que 2. Assertion (A): LiCl Crystal is pink.
Reason (R): Pink colour of LiCl crystal is due to excess Lithium.
Ans 2. Option (A) is correct.
Reason: LiCl crystal is pink due to excess Lithium. It is caused by a metal excess defect caused by anionic vacancies(F-centres).
Que 3. Assertion (A): The crystal lattice density increases due to the defect shown in the diagram.
Reason (R): Tetrahedral voids are surrounded by 4 constituent particles.
Ans 3. (D)
Reason: The crystal lattice density decreases due to the defect is shown in the diagram-Schottky defect.
Que 4. Assertion (A): AgCl shows Frenkel defect while NaCl does not.
Reason (R): Frenkel defect is shown when anionic vacancies are occupied by unpaired electrons.
Ans 4. (B)
Reason: AgCl shows Frenkel defect while NaCl does not as the size of Ag+ ion is smaller than Na+ ion. Frenkel defect occurs when the smaller ion dislocates from its normal site to an interstitial site.