By Dr. Vikas JasrotiaAugust 6, 2021No Comments Earlier Classification:
Dobereiner’s Triads: In the year 1817, Johann Wolfgang Döbereiner, a German chemist, tried to arrange the elements with similar properties into groups.

In triads, the atomic mass of the middle element is approximately the average of the other two elements. This is known as the Law of Triads. This classification was applicable to very few elements and so it was rejected. For example:

New Lands Law of Octaves: The attempts of Döbereiner encouraged other chemists to correlate the properties of elements with their atomic masses. In 1866, John Newlands, an English scientist, arranged the known elements in the order of increasing atomic masses and showed that the properties of every eight elements were similar to those of the first one. The relationship is just like the resemblance of first and eighth musical notes. He named this the Law of Octaves. But his classification was rejected since the law of octaves was applicable to elements up to calcium. The properties of the eighth element become not similar for the rest of the element. (1) Law of octaves was applicable only upto calcium (only for lighter elements).

(2) Newland adjusted two elements in the same slot (e.g. Co and Ni), having different properties. For example; Co and Ni with Fluorine, Chlorine, Bromine and Iodine.

(3) According to Newland, only 56 elements existed in nature and no more elements would be discovered in future. Atomic Radius: It is defined as the distance from the centre of the nucleus to the outermost shell containing electrons. Atomic radius is commonly expressed in picometre (pm) or angstrom (Å).it is measured by the x-ray diffraction method or by spectroscopic methods. Covalent radius: One-half of the distance between the nuclei of two covalently bonded atoms of the same element in a molecule (used for non-metals). 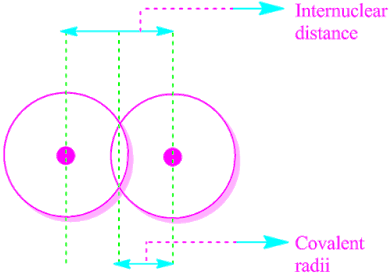 Metallic radius: One-half of the internuclear distance between the two adjacent metal ions in the metallic lattice. 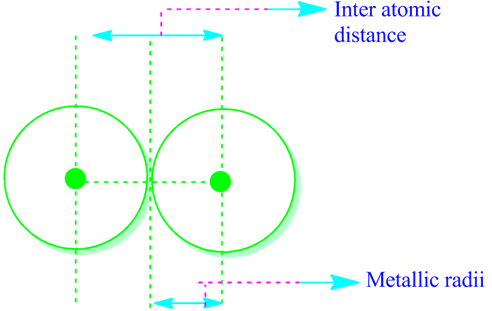 Variation of Atomic Radii Along the Period and Down the Group: The atomic size decreases from left to right in a period. This is because, in a period, the electrons are added to the same valence shell. Thus, the number of shells remains the same, but the effective nuclear charge increases. So, the atomic radius decreases. In a given period, alkali metals (group 1) have the maximum size and halogens (group 17) have the minimum size.

Down a group, the atomic radius increases from top to bottom. This is because of the increase in no. of shells and the Shielding Effect (in atoms with higher atomic numbers, the inner electrons partially shield the attractive force of the nucleus. So the outer electrons do not experience the full attraction of the nucleus and this is known as the shielding effect or screening effect).

Atomic radius of noble gases is larger than that of halogens. This is because noble gases are monoatomic. So van der Waal’s radius is used to express the atomic radius which is greater than covalent radius or metallic radius.

Ionic Radius: Effective distance from the centre of the nucleus of the ion up to which it exerts its, influence on its electronic cloud.
Generally, a cation is smaller than its parent atom (e.g. Na+ is smaller than Na atom). This is because a cation has fewer electrons, but its nuclear charge remains the same as that of the parent atom.  An anion is larger than its parent atom (e.g. Cl– is larger than Cl atom). This is because the addition of one or more electrons would result in an increased electronic repulsion and a decrease in effective nuclear charge.

The size of inert gases is larger than halogens because in inert gases all orbitals are completely filled, inter electronic repulsions are maximum.

Electronegativity Ionisation and Electron Gain Enthalpies:
Ionization Enthalpy (∆iH): Minimum amount of energy required to remove the most loosely bound valence electron from an isolated gaseous atom so as to convert it into gaseous cation.
It may be represented as:  X(g) + ∆iH → X+(g) + e–
Its unit is kJ/mol or J/mol. 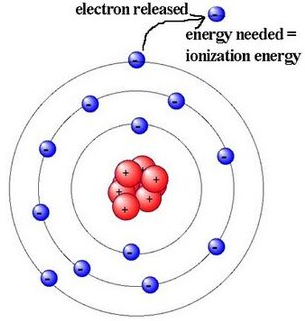 Electron Gain Enthalpy (∆egH): It is the enthalpy change when an electron is added to an isolated gaseous atom. X(g) + e– → X– (g). Its unit is kJ/mol.
The greater the amount of energy released, the higher is the electron gain enthalpy of the element.
It may be positive or negative depending on the nature of the element. For most of the elements, energy is released when an electron is added to its atoms. So ∆egH is negative. Noble gases have large positive electron gain enthalpy because of their completely filled (stable) electronic configuration.

Variation along the Period: From left to right across a period, ∆egH becomes more negative. This is because of a decrease in atomic radius and an increase in nuclear charge. So, the ease of addition of electrons increases and hence the ∆egH. 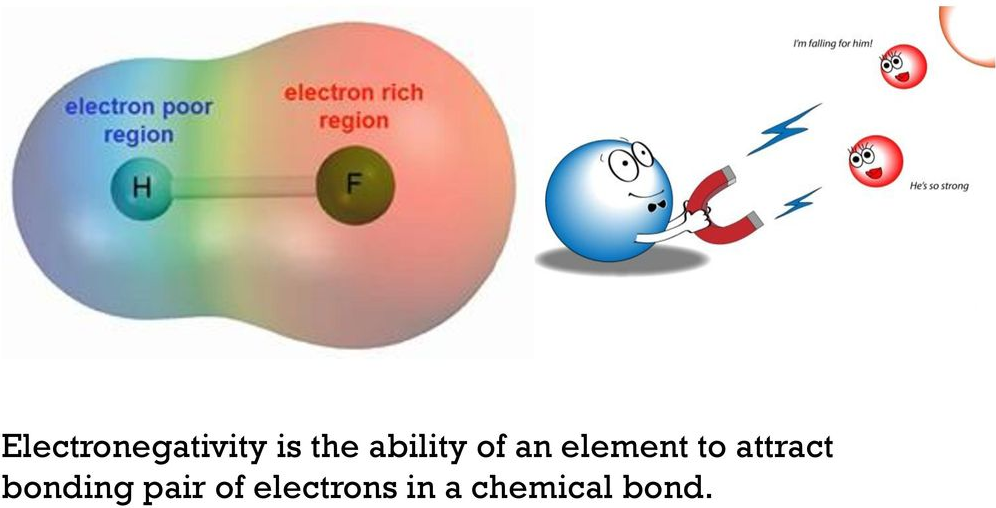 Diagonal Relationship: Some elements of the second-period show similarities with elements of the third period placed diagonally to each other due to the same charge/radius ratio.

Anomalous Behaviour of the first element of every group is due to
i). Small size and high electronegativity: N can form p π – p π multiple bonds whereas P cannot.
ii) High IE: They form only covalent compounds and not ionic compounds.
iii) Absence of vacant d orbitals: N cannot form NCl5 or R3N = O since it cannot expand its covalence beyond 4 whereas P can form PCl5 and R3P = O.

Valency of an Element: According to the electronic concept of valency, “the number of electrons which an atom loses or gains or shares with another atom to attain the noble gas configuration is termed as its valency.”

Periodicity:
(i) In period- The valency first increases then decreases from left to right in a period.
(ii) In group- The valency remains constant from top to bottom in a group. 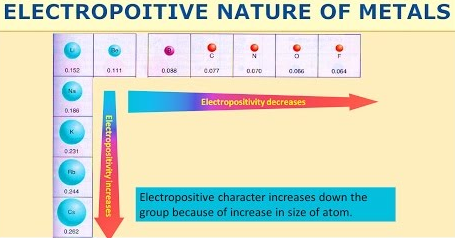 Variation of Various Properties along with the Periods and Groups 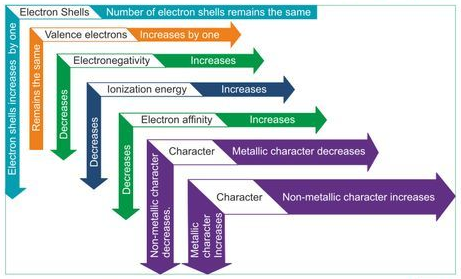