By Dr. Vikas JasrotiaOctober 4, 2021No Comments 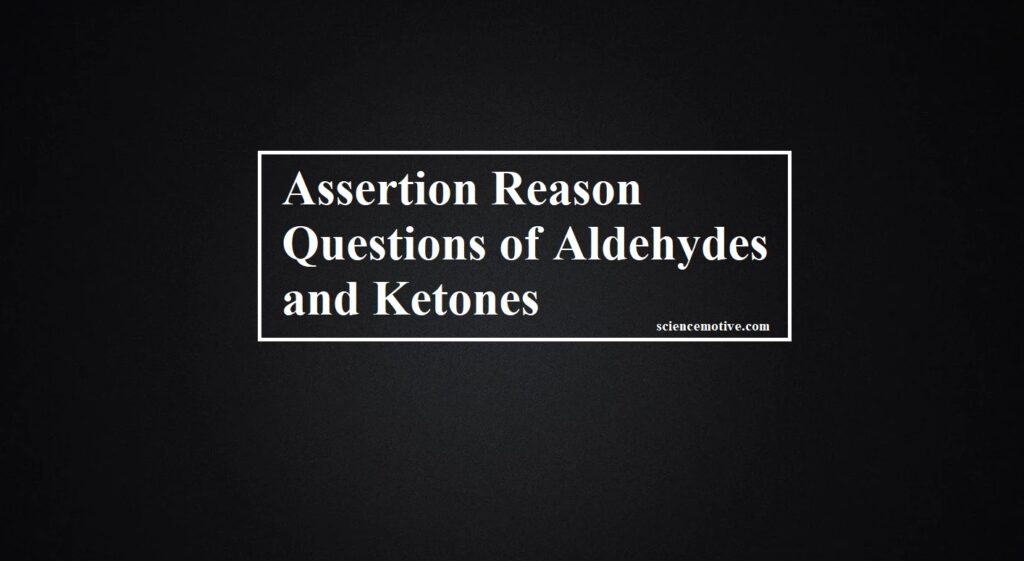 Que 2. Assertion: Carboxylic acids do not show the properties of a carbonyl group.
Reason: The -C=O in the carboxyl group is in resonance with the -OH group.
Ans 2. a

Que 3. Assertion: Benzonitrile is prepared by the reaction of chlorobenzene with potassium cyanide.
Reason: Cyanide (CN–) is a strong nucleophile.
Ans 3. e

Que 4. Assertion: Chloroacetic acid has a higher pKa value than Acetic acid.
Reason: The – I effect of Cl further stabilizes the carboxylate anion formed by the loss of the proton.
Ans 4. d

Que 5. Assertion: Lower aldehyde and ketones are soluble in water but the solubility decreases as molecular mass increases.
Reason: Aldehydes and ketones can be distinguished by Tollen’s reagent.
Ans 5. b

Que 7. Assertion: Benzaldehyde resists nucleophilic addition in comparison with Ethanal
Reason: The Phenyl group in benzaldehyde is too bulky and therefore prevents the attack of Nucleophile.
Ans 7. c

Que 9. Assertion: Aldehydes undergo aldol condensation only if it has α-hydrogen.
Reason: The ∝-hydrogen in aldehydes are acidic in nature because the anion formed by the loss of the ∝-hydrogen is resonance stabilized.
Ans 9. a

Que 11. Assertion: Isobutanal does not give an iodoform test.
Reason: It does not have ∝-hydrogen.
Ans 11. c

Que 12. Assertion: Benzaldehyde is more reactive than ethanol towards nucleophilic attack.
Reason: The overall effect of –I and +R effect of phenyl group decrease the electron density on the carbon atom of > C = O group in benzaldehyde.
Ans 12. a

Que 14. Assertion: Aldol condensation can be catalyzed both by acids and bases.
Reason: b-Hydroxy aldehydes or ketones readily undergo acid-catalyzed dehydration.
Ans 14. b

Que 16. Assertion: Ketones are less reactive than aldehydes.
Reason: Ketones do not give Schiff’s test.
Ans 16. b

Que 17. Assertion: Dry HCl is a must for the reaction of an aldehyde with alcohol to form hemiacetal.
Reason: HCl protonates the carbonyl oxygen increasing the electrophilicity of the carbonyl carbon.
Ans 17. a

Que 23. Assertion: Ketones are more reactive than aldehydes towards nucleophilic addition.
Reason: The alkyl groups in ketone increase the electron density on the carbonyl carbon through the +I effect.
Ans 23. D

Que 24. Assertion: a-Hydrogen atoms in aldehydes and ketones are acidic.
Reason: The anion left after the removal of a-hydrogen is stabilized by the inductive effect.
Ans 24. c