By Dr. Vikas JasrotiaFebruary 9, 2022No Comments 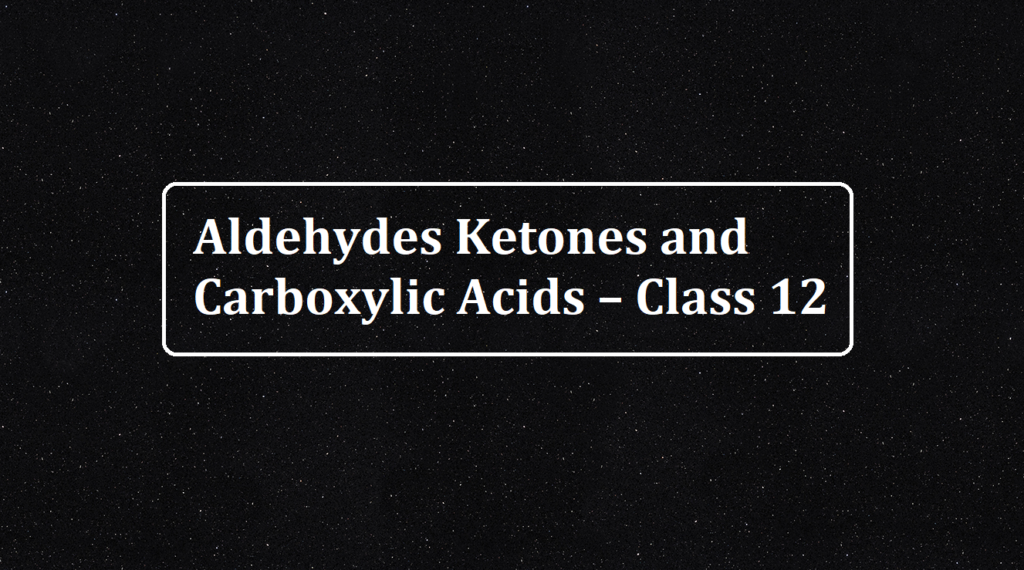 Que 4. Arrange the following compounds in increasing order of their reactivity in nucleophilic addition reactions.
(i) Ethanal, Propanal, Propanone, Butanone.
(ii) Benzaldehyde, p-Tolualdehyde, p-Nitrobenzaldehyde, Acetophenone.
Ans 4. The + I effect of the alkyl group increases in the order:
Ethanal < Propanal < Propanone < Butanone
The electron density at the carbonyl carbon increases with the increase in the +I effect. As a result, the chances of attack by a nucleophile decrease. Hence, the increasing order of the reactivities of the given carbonyl compounds in nucleophilic addition reactions is:
Butanone < Propanone < Propanal < Ethanal

Que 6. An organic compound (A) with molecular formula C8H8O forms an orange-red precipitate with 2,4-DNP reagent and gives yellow precipitate on heating with iodine in the presence of sodium hydroxide. It neither reduces Tollens’ or Fehlings’ reagent nor does it decolourise bromine water or Baeyer’s reagent. On drastic oxidation with chromic acid, it gives a carboxylic acid (B) having molecular formula C7H6O2. Identify the compounds (A) and (B) and explain the reactions involved.
Ans 6. (A) forms a 2,4-DNP derivative. Therefore, it is an aldehyde or a ketone. Since it does not reduce Tollens’ or Fehling reagent, (A) must be a ketone. (A) responds to iodoform test. Therefore, it should be a methyl ketone. The molecular formula of (A) indicates a high degree of unsaturation, yet it does not decolourise bromine water or Baeyer’s reagent. This indicates the presence of unsaturation due to an aromatic ring. Compound (B), being an oxidation product of a ketone should be a carboxylic acid. The molecular formula of (B) indicates that it should be benzoic acid and compound (A) should, therefore, be a monosubstituted aromatic methyl ketone. The molecular formula of (A) indicates that it should be phenyl methyl ketone (acetophenone). Reactions are as follows

Que 9. An organic compound (A) (molecular formula C8​H16​O2​) was hydrolysed with dilute sulphuric acid to give a carboxylic acid (B) and alcohol (C). Oxidation of (C) with chromic acid produced (B). (C) on dehydration gives but-1-ene. Write equations for the reactions involved.
Ans 9. Organic compound A is an ester as acid hydrolysis it gives a mixture of an acid and an alcohol.
Oxidation of alcohol (C) gives acid (B). Hence, the number of carbon atoms in (B) and (C) are the same.
Ester (compound A) has eight C atoms. Hence, both carboxylic acid B and alcohol C must contain 4 C atoms each.
Dehydration of alcohol C gives but-1-ene. Hence, C must be straight-chain alcohol, i.e butan-1-ol
Oxidation of (C) gives (B). Hence, (B) is butanoic acid. Que 10. What is the function of BaSO4 in the Rosenmund reaction?
Ans 10. BaSO4 acts as a catalytic poison that prevents further reduction of aldehyde to alcohol.

Que 11. Give a chemical test to distinguish between Benzoic acid and Phenol.
Ans 11. Benzoic acid forms a brisk effervescence with NaHCO3 solution but phenol does not respond to this test.

Que 14. Give chemical tests to distinguish between the following pairs:
(i) Butanal and Butan-2-one
(ii) Benzoic acid and Phenol
Ans 14. (i) Tollens’ reagent test: Add an ammoniacal solution of silver nitrate (Tollens’ Reagent) in both solutions. Butanal gives a silver mirror whereas Butan-2-one does not.
(ii) Ferric chloride test: Add neutral FeCl3 in both the solutions, phenol reacts with neutral FeCl3 to form an iron-phenol complex giving violet colour but benzoic acid does not.

Que 15. CH3CHO is more reactive than CH3COCH3 towards reaction with HCN. Give reason.
Ans 15. Because the positive charge on the carbonyl carbon of CH3CHO decreases to a lesser extent due to one EDG –CH3 and hence more reactive.

Que 16. Fluorine is more electronegative than Chlorine even then P-Fluorobenzoic acid is a weaker acid than p-Chlorobenzoic acid. State the possible reason for this.
Ans 16. Both fluorine and chlorine are implicated in the −I and +M effects with the benzene ring (owing to the presence of lone electron pairs). While the −I effect tends to increase acidic strength, the +M effect tends to decrease it. Because fluorine is more electronegative than chlorine, it has a higher −I effect. However, as compared to chlorine, it has a larger +M effect (opposing factor). This could be due to the fact that the 2p orbitals of carbon and fluorine are similar in size, whereas the carbon and chlorine atoms’ orbitals are not. As a result, p− fluorobenzoic acid is less potent than p−chlorobenzoic acid.

Que 17. Give reasons for the following:
(i) Iodoform is obtained when methyl ketones react with hypoiodite but not with iodide.
Ans 17. During the production of iodoform, methyl ketones or acetone is oxidised to the acetate ion. Because Hypoiodite is a stronger oxidising agent, it can convert acetone to iodoform, whereas iodide ion is a reducing agent and so cannot operate as an oxidizer.
(ii) Hydrazones of aldehydes and ketones are not prepared in a highly acidic medium.
Ans. Hydrazine becomes protonated in the very acidic media and hence is unable to serve as a nucleophile. As a result, extremely acidic media is not used to prepare aldehydes and ketones.

Que 18. Both alkenes and carbonyl compounds give addition reactions. How do the addition reactions differ in both the cases and explain why?
Ans 18. Because the double bond in alkenes connects two carbon atoms and there is no resulting polarity, electrophilic addition occurs, whereas nucleophilic addition occurs in aldehydes and ketones. The polarity of the carbonyl bond renders them susceptible to a nucleophile, an atom that gives electrons, in carbonyl compound reactions.

Que 19. Why does benzoic acid not undergo a Friedel-Craft reaction?
Ans 19. – COOH group in C6H5COOH is an EWG. that deactivates the benzene ring. Hence electrophilic substitution becomes difficult.

Que 20. Benzaldehyde gives a positive test with Tollen’s reagent but not with Fehling’s and Benedict solutions. Why?
Ans 20. It is due to the stronger oxidizing nature of Tollen’s reagent as compared to Fehling and Benedict’s solution and cannot oxidise benzaldehyde to benzoic acid. In general, all these three can oxidise aliphatic aldehydes.