By Dr. Vikas JasrotiaOctober 8, 2021No Comments 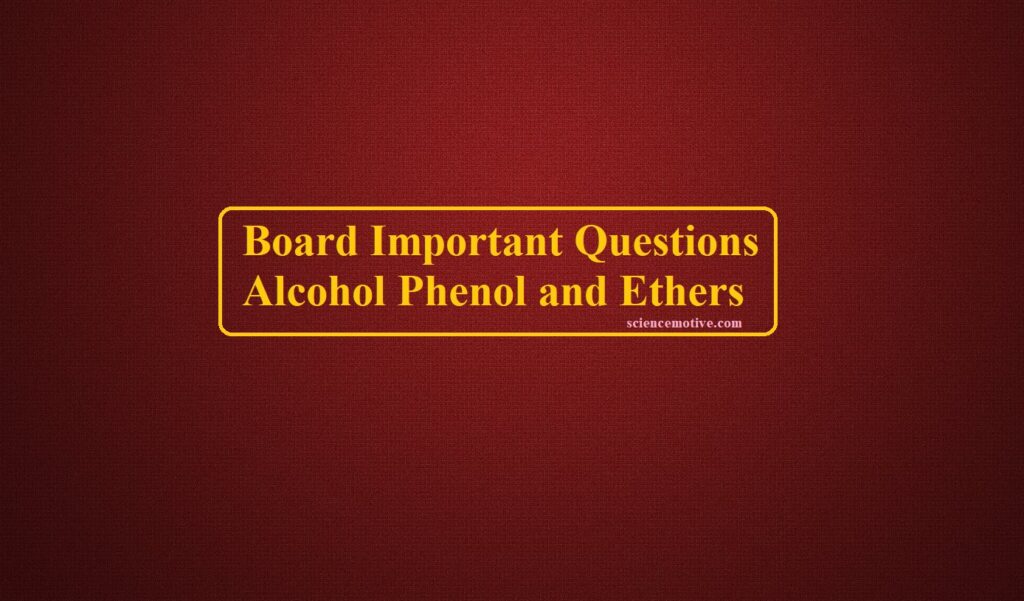 Que 2. Nitration is an example of aromatic electrophilic substitution and its rate depends upon the group already present in the benzene ring. Out of benzene and phenol, which one is more easily nitrated and why?
Ans 2. Phenol will be easily nitrated since the — OH group attached to the benzene ring activates it towards electrophilic substitution. Also, it directs the incoming electrophile towards ortho and para positions in the ring as these positions become electron-rich due to the + R effect of the — OH group.

Que 3. In Kolbe’s reaction, instead of phenol, phenoxide ion is treated with carbon dioxide. Why?
Ans 3. Phenoxide ion formed by treating phenol with sodium hydroxide which is more activating than phenol towards electrophilic substitution reaction. Hence, it undergoes electrophilic substitution with carbon dioxide, a weak electrophile. Ortho hydroxybenzoic acid is formed as the main reaction product.

Que 5. Ethers can be prepared by Williamson synthesis in which an alkyl halide is reacted with sodium alkoxide. Di-tert-butyl ether can’t be prepared by this method. Explain.
Ans 5. In tert-butyl halides, elimination is favoured over substitution, so alkene is the major product formed and ether is not formed.

Que 6. Explain why p-nitrophenol is more acidic than phenol.
Ans 6. In substituted phenols, the presence of electron-withdrawing groups such as nitro groups enhances the acidic strength of phenol. This effect is more pronounced when such a group is present at ortho and para positions. It is due to the effective delocalization of negative charge in phenoxide ions.

Que 7. Explain why alcohols and ethers of comparable molecular mass have different boiling points?
Ans 7. The high boiling points of alcohols are mainly due to the presence of intermolecular hydrogen bonding in them which is not present in ethers.

Que 8. The carbon-oxygen bond in phenol is slightly stronger than that in methanol. Why?
Ans 8. C—O bond in phenols has partial double bond character due to resonance and hence is difficult to cleave.

Que 11. Arrange the following compounds in increasing order of acidity and give a suitable explanation. Phenol, o-nitrophenol, o-cresol.
Ans 11. Increasing order of acidity will be o-cresol<phenol< o-nitrophenol. Explanation: In substituted phenols, the presence of electron-withdrawing groups such as the nitro group, enhances the acidic strength of phenol. This effect is more pronounced when such a group is present at ortho and para positions. It is due to the effective delocalization of negative charge in phenoxide ions. On the other hand, electron releasing groups, such as alkyl groups, in general, do not favour the formation of phenoxide ions resulting in a decrease in acid strength. Cresols, for example, are less acidic.

Que 12. Write complete reaction for the bromination of phenol in an aqueous and non-aqueous medium.
Ans 12. If bromine water is used tri substituted product is formed because phenol in water gets ionized to phenoxide ion which is more activating than phenol whereas this is not possible in a non-aqueous solvent like carbon disulphide etc. Que 13. Write steps to carry out the conversion of phenol to aspirin.
Ans 13. Following are the steps involved Que 15. Why is the reactivity of all the three classes of alcohols with conc. HCl and ZnCl2 (Lucas reagent) different?
Ans 15. Reaction with hydrogen halides: Alcohols react with hydrogen halides to form alkyl halides.
ROH + HX → R—X + H2O The difference in reactivity of three classes of alcohols with HCl distinguishes them from one another (Lucas test). Alcohols are soluble in Lucas reagent (conc. HCl and ZnCl2) while their halides are immiscible and produce turbidity in solution. In the case of tertiary alcohols, turbidity is produced immediately as they form the halides easily. Primary alcohols do not produce turbidity at room temperature. The order is followed on the basis of the stability of carbocation formed as an intermediate. Since tertiary carbocation is most stable, tertiary alcohols are most reactive. Thus, the order of reactivity of alcohols will be 30 > 20 > 10.

Que 16. Give reasons for the following:
(i) Phenol is more acidic than ethanol.
(ii) Boiling point of ethanol is higher in comparison to methoxymethane.
(iii) (CH3)3C—O—CH3 on reaction with HI gives CH3OH and (CH3)3C—I as the main products and not (CH3)3C—OH and CH3I.
Ans 16. (i) It is because after the removal of the H+ ion the phenoxide ion formed is more stable than methoxide ion.
(ii) It is because ethanol molecules are more associated due to the presence of intermolecular H-bonding, whereas methoxymethane does not have intermolecular H – bonding in it.
(iii) It is because (CH3)3C+ (tert. carbocation) is more stable, reacts with Iodide to form tert. butyl iodide.

Que 17. Give reasons for the following:
(a) Alcohols are more soluble in water than the hydrocarbon of comparable molecular masses.
(b) Lower alcohols are soluble in water higher alcohols are not.
(c) Ortho nitrophenol is more acidic than Orthomethoxyphenol.
(d) Picric acid gives sodium bicarbonate test.
(e) Alcohol reacts with sodium metal whereas ether does not.
Ans 17. (a) Alcohols have hydrogen bonding whereas hydrocarbons have a weak van der waal force of attraction.
(b) Due to steric hindrance higher alcohols are incapable of forming hydrogen bonding with water and so are insoluble in water.
(c) Ortho nitrophenol is more acidic due to the electron-withdrawing effect of the nitro group which facilitates the release of the proton.
(d) Picric acid is more acidic than carbonic acid due to the presence of three nitro groups showing an electron-withdrawing effect in picric acid.
(e) Alcohol reacts with sodium metal due to the presence of active hydrogen in it.